Farmers, particularly those who were affected by paddy bug infestations, low prices and bad grading during this crop, staged the protest during the commissioning of the Three Friends Pump Station. The protest was headed by the Guyana Rice Producer Association General Secretary, Dharamkumar Seeraj, and was joined by farmers from across Region Two. During the commissioning, farmers were armed with placards calling the attention of the minister of agriculture. 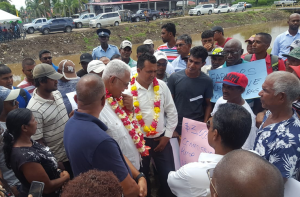 After the formal opening of the pump, the minister along with General Manager of the Guyana Rice Development Board, Nizam Hassan, and other officials went over to the farmers. They met with farmers and listened to their many concerns. Some of the concerns raised were: poor grading at rice mills, low prices for paddy and the absence of GRDB officials at the mills. Farmers also called on the government to speak with the loan agencies in the rescheduling of loans and also made request for a subsidy on fuel in an effort to go back into the new crop.

Farmers also complained about paddy bug infestation, which forced many of them to burn their fields especially in the Darthmouth areas. Seeraj told Minister Holder that presently they are approximately 167 farmers who are suffering tremendously during the crop. He said RPA has receipts from those farmers to show the damage they suffered during the crop. He said that farmers received very low prices from millers and most of them were given poor grade with high dockage.

After listening to farmers’ complaints, Minister Holder called on Hassan to investigate what was happening at the mills. He also urged the GRDB Manager to implement a penalty on errant millers. Minister Holder said he is moved at the low prices farmers were telling him about. 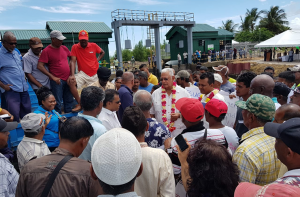