AGRICULTURAL stations are earmarked for all the major eco-zones in Guyana and the stations are intended to demonstrate the agricultural potential within six identified regions.

This is according to Agriculture Minister Noel Holder, who was at the time addressing a gathering at the Ebini Agricultural Station, Region 10 (Upper Demerara-Upper Berbice), during National Tree Day held on Friday under the theme: “Trees, Good for Community, Great for Country.” 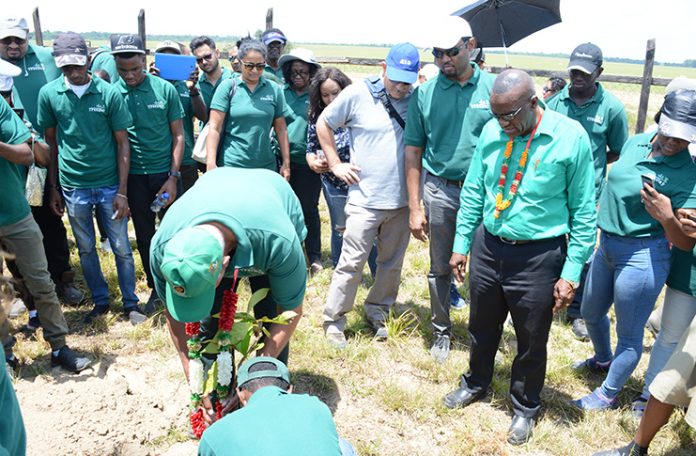 These stations, he said, will be developmental grounds for orchards, nurseries and seed production, as well as for breeding herds of cattle and small ruminants to provide stock for farmers and seed stock for entrepreneurs.

He explained that these initiatives will create new employment opportunities–both directly and indirectly — as the country’s economic base is moved inland and will complement other activities such as mining, forestry and support-service activities.

Adding that this fits in perfectly as government aims to ‘Shape Agriculture for a Green Economy’, Minister Holder said low-lying coastal savannahs in Regions Two, Three, Four, Five and Six will be targeted.

“The history of agricultural activity in these savannahs dates back to the 1930s, when the Kibilibiri and Ituni savannahs were used as ‘resting grounds’ for cattle brought by overland trail from the Rupununi Savannahs en route to Georgetown,” he reflected.

Minister Holder explained that the Ebini Agricultural Station was allocated a total area of land of approximately 54,000 acres.

The primary agricultural entities on the location include the Guyana Livestock Development Authority (GLDA); the National Agricultural Research and Extension Institute (NAREI); and the Ministry’s Hydrometeorological Service.

“A considerable portion of the land is under improved pastures and part is occupied by orchard crops and other areas of agricultural research. The GLDA continues to work to identify breed types and pasture species suitable for these savannahs,” Holder said. 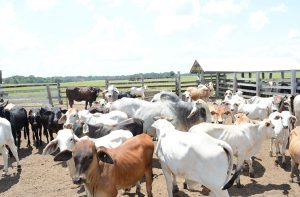 This cattle farm in Ebini currently experiments with breeds such as Brahman Zebu, Beef master and Brangus along with a number of pasture species

Currently, he said there are approximately 700 head of cattle and 300 sheep.

Over the last 15-20 years, Minister Holder said, a number of different breeds of animals have been developed and identified for the Ebini location, to get the best combination of livestock and pasture species.

Brahman Zebu, Beef master and Brangus is currently the breed types of cattle being investigated, along with a number of pasture species.

Further, he noted that Ebini is also the national repository for the Barbados Black Belly breed of sheep.

Additionally, he said more reliable river transport is under consideration.

“The GLDA has procured a $50M cattle barge to transport animals for the farmers in the Berbice River and the Intermediate Savannahs.

National Tree Day
The minister said that National Tree day is one of the ministry’s major activities in Agriculture Month, 2018. “We should endeavour to maintain and add to our green landscape. Many times we ignore the little interventions which can have meaningful impact, such as enhancing our neighbourhoods by cleaning drains, planting trees, etc.,” he said.

The Agriculture Minister said another important aspect of the research programme as envisioned for Ebini, is the provision of formal training at the tertiary level. 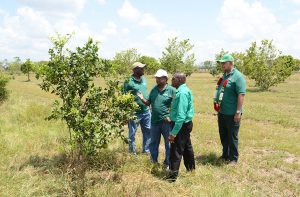 CEO of NAREI, Dr. Oudho Homenauth (second from left) explaining to Region 10 Chairman, Renis Morian and Minister Holder, the benefits of the orange orchard in Ebini.

“There will be a training centre for students from the University of Guyana (UG) and the Guyana School of Agriculture. These facilities will include accommodation and modern teaching aids. Through government-to-government collaboration, we will rely on the invaluable and vast experience available in Brazil for the management of our savannah ecosystem,” Holder disclosed.

Meanwhile, Minister Holder noted that under the Sustainable Agriculture Development Project (SADP), more emphasis will be placed on soybean cultivation under an IDB- funded project, which will commence in early 2019.

He explained that the IDB component focuses on strengthening the agricultural innovation and extension system, and will finance the buildings and equipment required at the Ebini Agricultural Station.

He stressed that Guyana is particularly vulnerable to the negative effects of climate change, particularly the low-lying coastal regions, where well over 80 percent of the nation’s population reside.

“Due to the effects of rising sea levels, we must concentrate on adapting to, and/or mitigating the impacts of climate change by, inter alia, extending our agricultural base inland and these Intermediate Savannahs of Region 10 (approximately 292,000 hectares ) have been earmarked as Guyana’s new agricultural frontier,” Minister Holder stated.

In attendance at the event were parliamentarians, members of the diplomatic corps, toshaos, regional officials, farmers and other residents of Region 10.