African swine fever (ASF) is a viral disease of pigs and wild boar that is usually deadly. There are no vaccines nor cures. For this reason, it has serious socio-economic consequences in affected countries. However, humans are not susceptible to the disease.

Deputy Chief Executive Officer (CEO) of the Guyana Livestock Development Authority (GLDA), Dr. Dwight Walrond, said the recent spread of ASF in Europe and most recently in Asia, is responsible for huge economic losses within the pig industry, endangering the livelihoods of many smallholders. 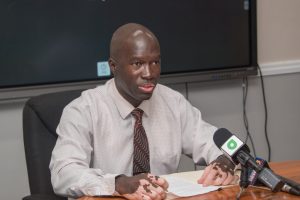 Dr. Walrond made these remarks Thursday morning while addressing journalists at a media conference, at the GLDA Head Quarters, Agriculture Road, Mon Repos.

The Deputy CEO noted too that strong collaboration by the regional and international communities, as well as good communication, are essential to minimising the effects of the devastating ASF.

Given the gravity of the situation and following the request of its member countries at the general session in May, the World Organisation for Animal Health (OIE) launched a global initiative for the control of ASF. The objective is to control the disease, strengthen countries’ prevention and preparation efforts, and minimise the adverse effects on animal health, animal welfare and international trade.

Dr. Walrond highlighted that the American regions of which includes Guyana, is free of the disease and its free status must be preserved. However, he said lack of precautions by professionals, hunters, travellers, farmers, or even anyone unaware of its transmission pathways could result in the emergence of ASF.

Dr. Walrond said the 10th meeting of the GF TADs Steering Committee of the Americas, which received successful participation from 15 OIE delegates, senior authorities, alongside Regional Organisations representing North, Central and South America, held a discussion which led to the creation of a Standing Group of Experts on African Swine Fever (SGE-ASF), taking the SGE ASF created in the European region in 2014 as a model.

“Indeed, developing measures specific and adaptable to the region is essential to prevent the entry of the disease thanks to the definition of priority actions oriented to local needs and complementary of the global initiative. Internationally recognised ASF or swine disease experts with experience working in Europe or Asia will be launched in the group on an ad hoc basis on the agreement of the SGE-ASF.”

He underscored that the presence of representatives of the pig industry is to be noted, citing that this is a good example of how Private-Public Partnerships (PPPs) can reinforce the effectiveness of veterinary service activities and support the implementation of a global programme for the control and the eradication of animal diseases.