The President, in his address, said trees are important to Guyana’s sustainable development drive.  He said the National Tree Day highlights the importance of trees to the economy and environment adding that “trees are part of our natural patrimony”.

“The ‘Day’s’ celebrations have emphasized the aesthetic, economic and environmental importance of trees and, also, their social and recreational value,” the President said. 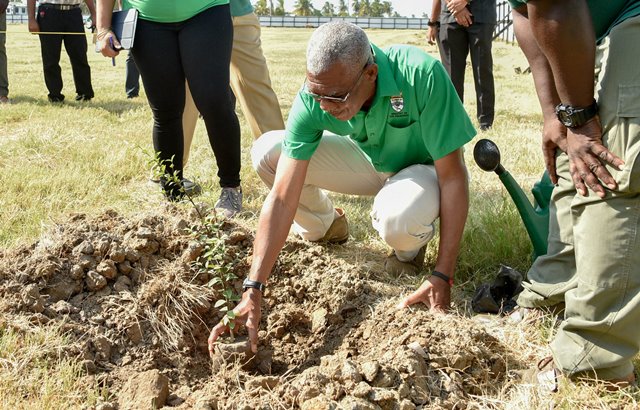 The observance of National Tree Day commenced in October 2015 and President Granger reminded that trees are essential to human existence and the preservation of Guyana, as a Green State. He said trees provide products used by humans such as clothing, food, housing and medicines. They protect our biodiversity; provide eco-system services, such as the regulation of the water cycle, pollination, temperature modulation, carbon sequestration and air purification; and beautify the surroundings. 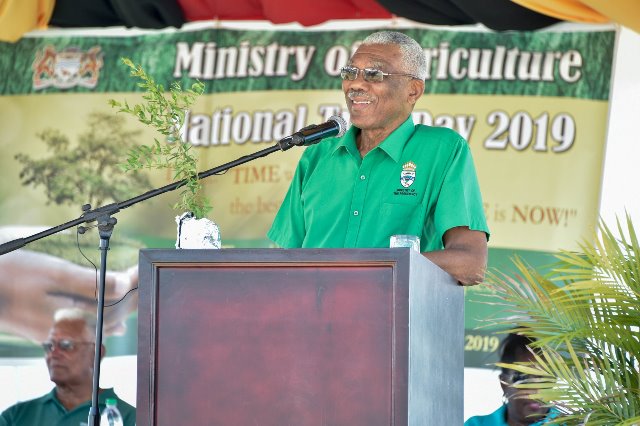 “Guyana’s trees are the part of the lungs of the earth and the habitat of our unsurpassable biodiversity.  The environment is world class,” the President said while noting that Government will continue to promote the preservation, proliferation, protection and planting of trees.

The Head of State noted too that trees are abundant in Guyana’s landscape. Guyana is part of the Guiana Shield, one of the world’s oldest geological formations and largest blocks of tropical forests and biologically rich and diverse zones.

The Guiana Shield is also home to thousands of species of plants and contains 15 per cent of the world’s freshwater supplies.

“Guyana boasts of five forms of forests – dry evergreen, marsh, seasonal, swamp and tropical – which cover more than 80 per cent of its territory,” the President said.

Guyana’s forests provide essential environmental and ecosystem services which protect the country’s natural capital and its people and sustain life. The forests are the habitat of more than 800 species of birds, 179 species of reptiles, 225 species of mammals and much of the 130 species of amphibians.

They sequester more carbon than the country’s human activity generates which helps to mitigate the effects of greenhouse gases and global warming. Guyana is a ‘net carbon sink’.

Guyana has dedicated the Kanashen Protected Area – located in the Rupununi and spanning an area of almost 7,000 km2 – to the Queen’s Commonwealth Canopy, a network for forest conservation projects.

The Head of State, however, reminded that the extractive industries could present a threat to the environment. These industries, despite the economic benefits they provide, are associated with air pollution, biodiversity loss, freshwater and oceanic contamination, greenhouse gas emissions, land degradation and resource depletion.

“Logging and mining are the main causes of deforestation which destroys biodiversity and could result in land degradation.  Reforestation, land reclamation and the encouragement of environmentally-friendly logging and mining are two of the measures which will be employed to counter the adverse effects of extractive industries,” President Granger said.

President Granger said too that trees provide a range of economic services as well as food, shelter and medicine. “Farmers reap produce from trees which allow them to earn an income, sustain their families and generate exports and employment. Agriculture, forestry and fisheries collectively account for 17.5 per cent of our employed population,” the President said.

Some attendees at this year’s National Tree Day 2019

“Trees must be valued rather than devalued by recklessly burning, bulldozing and chopping them down. They are worth more alive than dead and cold ash,” President Granger said.

Additionally, the Head of State reminded that trees are also vital to food security noting that the East Berbice-Corentyne Region has sufficient lands, expertise and experience to guarantee Guyana’s food security as well as to contribute to the Caribbean’s.

President Granger said that for more than 150 years, rice and sugar cane have been important economic crops which have sustained the local economy. He said too that the Corentyne, apart from sugar and rice, enjoys a comparative advantage in the cultivation of fruits and vegetables.

“Guyana’s exported fruits and vegetables were worth US$ 8M in 2018. This value is way below our natural potential. Economists calculate that if we had a more robust programme for agro-processing  we could export US$ 250M worth of agricultural produce. We could export more in agricultural produce than we are exporting in sugar and rice (by value),” President Granger said.

The Head of State said the agro-industry – that is the production, processing and packaging of food – using modern equipment and methods on a large-scale – is a key element of Government’s strategy to ensure food security.  This he said will reduce food imports thereby making more local food available in processed form.

Moreover, the President said   agro-processing has the potential to transform rural and hinterland communities and augment the national product.  “When value is added to primary production, its export value is increased, exports are stimulated and foreign exchange and employment are generated,” he stated.

“A quiet revolution has been taking place over the past four years because your Government has been placing emphasis on agro-processing and micro-enterprises,” President Granger added. 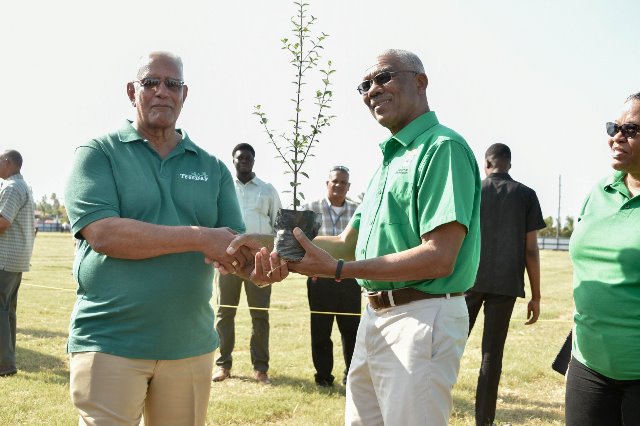 Minister Holder said the National Tree Day is not only about planting trees but to expect preserve trees and to avoid deforestation.

“Deforestation is reversible by managing forestry resources and planting new trees.  Replacing those we lose are good steps to reduce deforestation and its negative environmental impact. We must act now to prepare ourselves and deal with the basic causes of global warming,” said the Minister of Agriculture.

This afternoon’s exercise was themed “Time waits for no one; the best time to plant a tree is now”.