Removing any trade issues against certain fresh crops produced by Guyanese farmers is the vision of the Carambola Fruit Fly (CFF) programme being implemented by the National Agricultural Research and Extension Institute (NAREI) in collaboration with the Inter-American Institute for Cooperation on Agriculture (IICA).

Dr. Oudho Homenauth, Chief Executive Officer of NAREI during his presentation at the CFF Workshop held today (Monday) at Regency Suites, Georgetown, emphasized the economic hardship that the infestation of this pest has caused farmers. The control and ultimate eradication of the CFF is crucial to improve the livelihoods of farmers, particularly those in the hinterland, where the pest has a high population, he added. 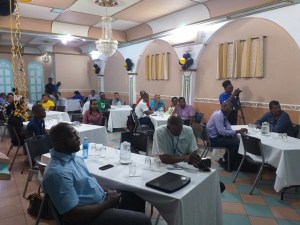 Speaking to the gathering comprising Quarantine Officers, Extension Officers and farmers, Dr. Homenauth said that careful inspection is required for commodities entering Guyana from Brazil. He pointed out that the pest was first observed in Region Six in 1993 an indication it had entered from Suriname.

The CFF has since spread to other parts of the country via the movement of people and commodities. In fact, a recent survey conducted by the Institute proved that the pest is prevalent in Regions Six, Eight and Nine. The findings of the survey formed the basis of the workshop.

NAREI and IICA have collaborated to enhance public awareness of the pest through social media, radio broadcast, posters and community outreaches. Furthermore, Officers as well as community leaders will be trained to better control the CFF.

However, Guyana cannot tackle the spread of this pest in isolation owing to its porous borders.  According to Mr. Wilmot Garnett, IICA Country Representative, Guyana, Brazil and Suriname have signed a Memorandum of Understanding outlining areas of collaboration to control this pest of economic importance. One area that would benefit both Guyana and Suriname is the creation of a support structure for Suriname to implement an effective CFF programme.

Ms. Nedd stated that citrus are among the fresh fruits with the greatest export potential, however, exporting same is a major challenge for the country in view of the need to comply with the Phytosanitary requirements demanded by the importing country.

She added that the agriculture sector is somewhat stymied by the limited exportation of non-traditional fruits due to the uncontrolled presence of the CFF. Only recently the list of fruits with restrictions due to this pest has increased in the United States of America due to the published information on new host range.

Farmer Charlton Nurse, whose farm is located in West Watooka, Region 10 is contemplating cutting down his cashew and citrus trees if the CFF is not controlled. For some time his ability to earn from the crops is being impeded owing to the pest. There are Jackson traps on his farm. He is willing to give the programme a chance.