Work together for expansion of Agri Sector – Min. Holder urges

Minister of Agriculture, Noel Holder has urged stakeholders to work together for the growth and expansion of Guyana’s agriculture sector.

Speaking at the recently concluded 12th National Toshaos Council conference last week, at the Arthur Chung Conference Centre, Minister Holder highlighted the gains to be had from cooperation among players in the local agriculture sector. 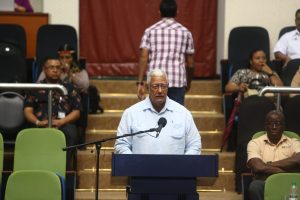 “If we work together we can accomplish a vibrant agricultural sector. One which has the potential to not only reduce the country’s import bill; but also position Guyana to be a major exporter both regionally and internationally,” Minister Holder said.

Additionally, the Agriculture Minister said the government’s drive to aid the growth and development of hinterland agriculture will result in major savings and health benefits to the hinterland communities. He also predicted the creation of jobs.

“The approach we are taking to satisfy the food demand within the regions is for each community to be self-sufficient. This will see enormous benefits, as residents will save. In some cases, the food price comprises approximately 90 percent of transportation cost. Therefore, production for sale within the communities will ultimately increase the income of the residents. More so, we are targeting the communities to supply the school feeding programs,” Minister Holder explained.

Since coming to office in 2015, the government has undertaken to boost agricultural development in Guyana’s hinterland as a means of mitigating the effects of climate change on farming which is predominantly situated in the low lying coastal regions.

To date, the Ministry of Agriculture through the Guyana Livestock Development Authority, the National Agriculture Research and Extension Institute and other agencies have established a number of pilot programmes in several hinterland communities. Among the programmes launched is the Black Giant poultry programme and the apiculture project which targets Regions One, Seven, Eight and Nine.