Medford harvested some 450 pounds of the Mercedes variety of onions from six beds, with three beds yet to be harvested. This will eventually take the total to approximately 800 pounds of onions. 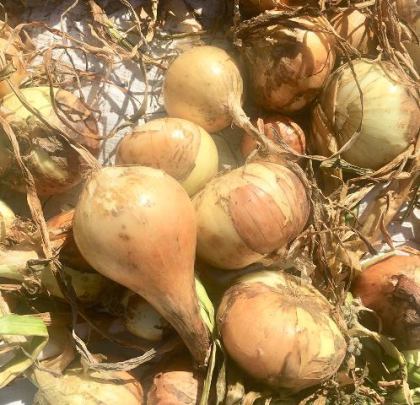 Some of the onions harvested by Medford.

The young farmer was given the opportunity to be part of a project where a core group of farmers were provided with the necessary seeds or plants and instructed on the methodology to plant non-traditional crops such as onions, bell peppers and carrots.

He took the challenge head on and chose to cultivate onions and bell peppers.  Initially, in December 2017, he began with three beds but lost 30 percent of his crops due to the inclement weather. Persevering, Medford recognised where he was going wrong and made the necessary adjustments and added six more beds.

Assisted by his wife, Medford tended his beds which were 60 feet long by 3 feet wide, using only a synthetic fertilizer, in the beginning, to boost nitrogen content in the soil. The crop was cultivated organically throughout. 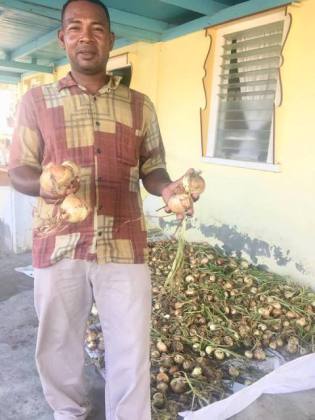 “It is a lot of hard work but after a while you know what has to be done and one of the things that was a bit of a challenge for us was that we could not use any form of chemicals to get rid of grass so it took a bit to maintenance and control of the weeds but we managed”, Medford explained.

Given his success thus far, he now plans to employ two more persons in an effort to double their production after the rainy season ends. Additionally, Medford has plans to obtain more lands to increase production to meet the demands of the local market.

The onion trial project is an initiative by Promotion of Regional Opportunities for Produce and Enterprises and Linkages (PROPEL) in partnership with the National Agricultural Research and Extension Institute (NAREI).

As part of the project, several trials of the Mercedes type onions were cultivation by small farmers in Regions Two, Three, Four, Five, Six and Ten in 2017. It was determined that this type is most suitable for large-scale cultivation in Guyana, thereby reducing dependency on imported varieties.

Agronomist and Crop Extension Officer for NAREI, Mangal, who has supervision over the projects has explained that in addition to Medford, there are at least three other farmers who have had successful trials and are now looking to expand their production.

He explained that as a fail-safe, the farmers are being advised to increase production gradually to cushion any unexpected loss that they may encounter.

The project is expanding to other areas on the Corentyne with emphasis on Number 55/56 area.  Mangal is encouraging persons desirous of planting to contact NAREI’s office located a Tarlogie, Corentyne.