EXPORTERS and the Guyana Marketing Corporation (GMC) have committed to establish, normalise and sustain a successful exporters’ association in Guyana.

Towards this end, the Guyana Non-Traditional Agriculture Exporters Association (GNTAEA), has resuscitated its body with the recent election of new members, which was conducted at the Central Packaging Facility, Sophia Exhibition Centre.

This was a result of having multiple meetings to discuss its resuscitation. 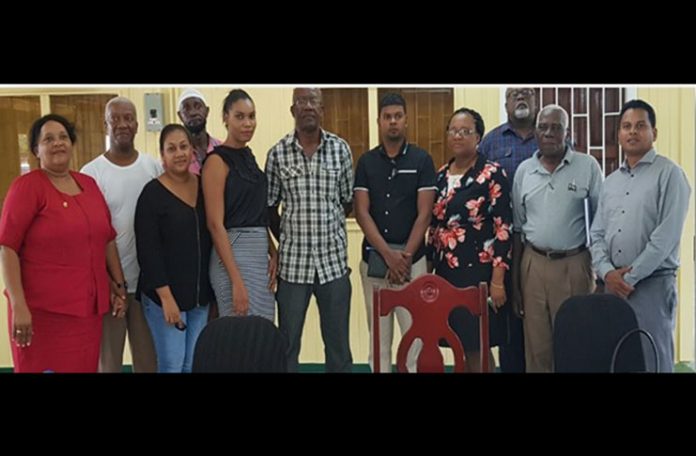 President of GNTAEA, Mr. Wyette Amsterdam (centre), Ms. Pearlina Gifth (fourth from right) and other members of the management committee

In June,2010,the Guyana Non-Traditional Agriculture Exporters Association was registered as a specially authorised society under the Friendly Societies Act, Chapter: 36:04.

This association however became non-operational and was never fully revitalised, even after two attempts were made, the first being in 2014 and thereafter in 2016.

One of the objectives of the association is to work with farmers to produce high-quality produce that meets local and international standards, amongst other activities.

Mrs. Ida Sealey-Adams, general manager of the GMC, noted that she was indeed excited to see the association resuscitated and urged the members not to be impatient, since they are procedures that must be followed at the Ministry of Social Protection’s Cooperative Department.

Further, she said the corporation will continue to support the association and is committed to providing technical assistance as far as is practical to ensure the association remains active.

The general manager extended best wishes to the new members on behalf of the board of directors, management and staff of the corporation.

This, he said, will surely benefit farmers in expanding their production and improving their quality. He further asserted that in so doing, Guyana will be the breadbasket of the Caribbean and countries farther afield.

Celestine Butters, packaging facilities manager, who was instrumental in pioneering the resuscitation of this association, in an invited comment stated that “the non-traditional agriculture export sector is critical to Guyana’s economic development and earning of foreign exchange.”

She expressed happiness that election of the exporters association members has been realised.

Adding that the next process is registration of the association which is in progress, Butters said, “In the agriculture sector, we seek to improve on efficiency and product quality, as the global market is a highly competitive place and by participating in this marketplace, we need to become equally efficient and quality conscious.”

She continued: “It is generally the case that successful exporters are also very successful in their home markets, because of their heightened efficiency and focus on product quality. With the association, we can see that exporting is one way of increasing our sales potential; it expands the ‘pie’ from which one earns money, otherwise we are stuck trying to make money only out of the local market. Exports help to put idle production capacity to work, an association works as one body.”

Amanda Singh, general manager of Interisland Healthy Choice, commented that “This resuscitation will benefit the exporters and farmers significantly, by providing a united platform to resolve the usual challenges of satisfying a global marketplace.”

She thanked the Guyana Marketing Corporation and the Ministry of Agriculture for facilitating this process and is looking forward to a future “where non-traditional products are easily exported to the most challenging markets, benefiting the economy of Guyana and the livelihoods of numerous farmers and their employees.”