Following a pilot project, between PROPEL and the National Agriculture Research and Extension Institute (NAREI), that realised the successful cultivation of onions in Hopetown Village on the West Coast of Berbice (WCB), a current research project is being conducted at Fort Wellington, also on the WCB, by two students from the University of Guyana (UG). 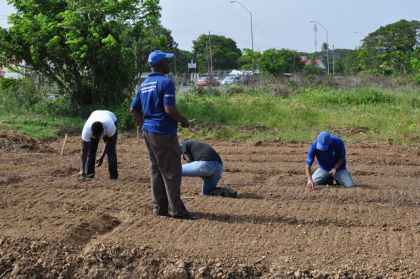 PROPEL facilitators (in blue) in field with research students.

The students will be conducting research under the supervision of technical officers from PROPEL. One student will assess the varieties of onion best suited for Guyana’s climate, while the other will compare the direct seeding method with the transplanting method. The students will be looking at the length of time each variety takes to mature. The aim of the exercise is to be able to harvest before the onset of the May-June rains.

Having established that onion can be successfully grown, the agencies have embarked on this project with the objective to fully document every aspect of the venture.  The carefully documented findings from the research will serve as future reference for anyone who wants to embark on the cultivation of onion. Another objective of the project is to prove that onion production is economically viable in Guyana.

NAREI has the mandate to promote local production of a number of crops so as to reduce importation of such, and onion is listed among these.

According to Jason Persaud, who is one of the officers involved in the project, having gone through the initial pilot projects, PROPEL is now adopting the role of a facilitator while allowing stakeholders to become involved. In this case, MASSEY has adopted the project and has provided the seeds to be used. The company has also distributed other products related to the venture; the use of these will be documented throughout the life of the project.

PROPEL – Promotion of Regional Opportunities for Produce through Linkages, is a Canadian funded program which seeks to link fresh produce buyers in the region and beyond, with Caribbean farmers, processors and related businesses. The projects are implemented by World University Services of Canada (WUSC), with financial support from donors and the Government of Canada. 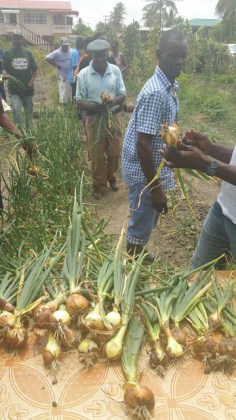