Exporters Association to be resuscitated soon

Earlier this afternoon, the decision was taken to resuscitate the Guyana Non-Traditional Agriculture Exporters Association (GNTAEA), following a meeting between the Guyana Marketing Corporation (GMC) and exporters of Non-Traditional products. 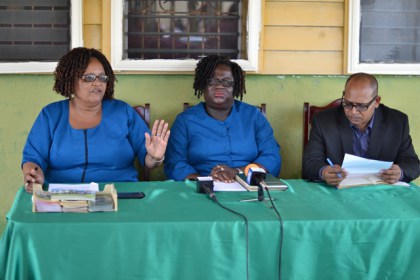 Last year, 20,000 tonnes more Non-Traditional crops were exported when compared to 2016, according to General Manager of the GMC, Ida Sealy-Adams referring to data that the GMC is currently reviewing. As such, the corporation thought is best to have the GNTAEA revived in order to have some of the issues addressed.

Today’s meeting was “long overdue” Sealy-Adams noted. “We have to have a group we can associate with, to move things faster than it is currently.”  It was decided by the exporters present today, that another meeting will be held on February 15 in order to have members elected to manage the association.

“We believe we can collectively include seafood processors, with other non-traditional exporters to better build exporting services,” Sealy-Adams added. There are more than 50 exporters operating the GMC – seafood, craft, fruits, and vegetables together. This association will bolster the Non-Traditional programme to ensure stability.

It was explained by the Manager of the Central Packaging Facility, Celestine Butters, that five years ago, the exporters association became defunct with the passing of its president. She noted that attempts were made to resuscitate the body, however, this was futile due to lack of proper communication among the exporters. Butters explained, having the body reestablished will improve communications and business relations for both exporters and farmers, a task she is prepared to undertake.

Having an exporters’ association, according to Chairman of GMC, Omdatt Chandan, will help to foster better cooperation and coordination among members, as it relates to obtaining products and business; help with accessing loans and grants, boost bilateral relations (business opportunities).

Exporters were urged by Marketing Coordinator of GMC, Milton Dookie, to get on board with the association noting that farmers will benefit. He explained that the Farmers Association has had a tremendous impact on the way farmers conduct business.

Exporting fruits and vegetables is done by private individuals and companies in Guyana, through the Guyana Marketing Cooperation (GMC). This body, however, enables all stakeholders involved in non-traditional crops to have a voice. Within recent times the Non-Traditional agriculture sector has shown high growth potential, which contributes positively to the nation’s economic growth.