The rehabilitation of sluices, channels, and revetments along the Boeraserie Water Conservancy on the West Coast of Demerara are nearly completed. On Thursday, September 14, the Minister of Agriculture Noel Holder along with the Chief Executive Officer of the National Drainage and Irrigation Authority (NDIA), Frederick Flatts along with Regional engineers visited these structures to assess the work completed so far.

The Head of the NDIA explained that most of the structures were left in a state of disrepair and needed urgent attention. The Boeraseire Water Conservancy stretches from Canal Village on the West Bank, all the way to Parika; its outlet being the Essequibo river. 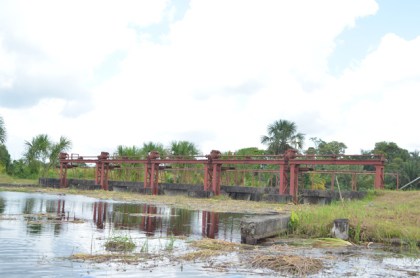 The Five door sluice at Waramia, along the Boeraserie water conservancy, Region Three.

Flatts said that rehabilitative works have been conducted at the main drainage channel at Leonora, while the five-door sluice at Waramia which releases water into the Bonasika river has also been rehabilitated.

The main channel at Leonora provides service to Den Amstel, Fellowship, Blankenburg, La Jalousie, Ruimzeight. Flatts said that “straight through to Versailles this is the main channel so from here you will have intakes or secondary regulators that will take water into the various areas”.

Meanwhile, regarding works around the Waramia area, Flatts explained, “We are working in this area right now raising the dams right in the Bonasika area and we are also cleaning the burrow channel further back we saw that the 8000-ft. weir was just recently cleared and that allows excessive water or water above a certain elevation”.

$234 M has been allocated to NDIA to cover capital and current expenditure items that have been budgeted. The aim of having these structures rehabilitated is to ensure that farmers do not suffer losses during drought periods or in times of heavy rainfall which may result in flooding.

Other structures along the Conservancy have been examined and are said to be in working order. The CEO of NDIA along with the minister and other engineers are expected to visit the East Demerara Water Conservancy to conduct a similar exercise on Friday, September 15, 2017. 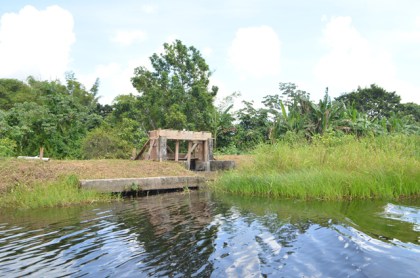 One of the structures along the Boeraserie water conservancy currently under rehabilitation.