The National Agricultural Research and Extension Institute (NAREI) have utilised a number of new banana lines which is most likely resistant to the Black Sigatoka Disease. Chief Executive Officer (CEO) of NAREI, Dr. Oudho Homenauth said that these varieties have been acquired from Nigeria. 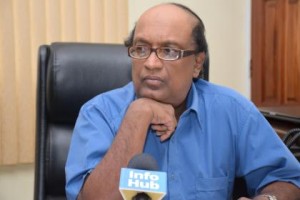 Guyana is one of four countries benefiting from a CARDI/CDB-funded project for the Development of an Integrated Disease Management Programme for Black Sigatoka Disease. Other countries are St Lucia, St Vincent and the Grenadines, and Dominica. As a result of this programme these new lines (varieties) have been acquired.

Black Sigatoka is a leaf-spot disease, caused by the ascomycete fungus Mycosphaerella fijiensis (Morelet) that affects banana plants. High rainfall and humidity of the tropical regions are conducive conditions for the disease development. The Black Sigatoka is said to be the most detrimental leaf disease of bananas and plantain worldwide.

When the CEO was interviewed by the Department of Public Information (DPI), he said that, “Those that were planted out there, we have been now collecting data on the production but that is one aspect of it. We also have to evaluate the taste because they are new. The taste and quality that they have because (in) Guyana, I have noticed that some of the bunches of plantain looks white. When you peel it, it’s white.”

He added that local consumers of the regular ‘creamish’ texture plantain may not be familiar with the new varieties because of its consistency. However, he said careful consideration must be made before NAREI initiates large scale production of the new varieties.