$11.5b of the budgeted $20.6B for agricultural expansion, diversification, and improved Drainage and Irrigation was expended in the first half of 2017, to promote government’s “Green Economy” agenda and to enhance agricultural development in the Intermediate and Rupununi Savannahs.

The expansion of farms has also commenced at Hosororo and Ebini where the cultivation of spices and orchard crops increased, while demonstration farms were operationalized in St. Ignatius, Kato, and Hosororo. 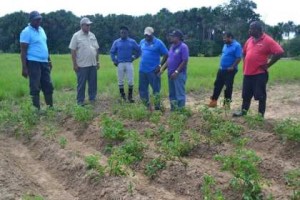 Minister of Agriculture Noel Holder and other officials visiting the irish potato farm at Ebini, Region 10

Flood risk management continues to be a priority for Government with over $2.1B expended in the first half of the year on the construction, rehabilitation, and maintenance of the Drainage and Irrigation(D&I) systems and structures. This is in keeping with the commitment to the Sustainable Development Goals (SDG), in particular, Goal 13: which states, “Take urgent action to combat climate change and its impacts”.

The mapping of 10 percent of the D&I systems maintained by the National Drainage and Irrigation Authority (NDIA), to improve the management of D&I systems, has been completed. 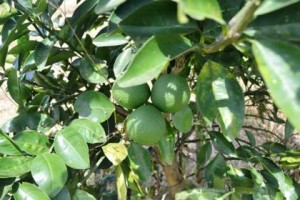 Additionally, US$4M was committed for the procurement of nine fixed pumps, to be installed in the coastal regions, and five mobile pumps to be deployed as needed within Georgetown. This will commence in the second half of 2017.

Meanwhile, ongoing diversification efforts in the wider agriculture sector saw, the fisheries sub-sector showing signs of growth. The aquaculture production increased by 12.2 percent in the first half of 2017 compared to the similar period in 2016.

The overall increase in marine production between these periods stands at 9.7 percent However, it is noted that the private sector interest in tuna resulted in a catch of over 390,000 pounds for the first half of this year.