For sustainable agricultural development to be realized, a holistic approach by key players is necessary for the strengthening of the industry. These sentiments were echoed by Agriculture Minister, Hon. Noel Holder today as he delivered the Opening Address at the 32nd West Indian Agricultural Economics Conference.

Today’s event which forms part of a five-day conference is organized by the Caribbean Agro-Economic society through a collaborative effort of the Ministry of Agriculture-Guyana and the University of the West Indies (UWI). 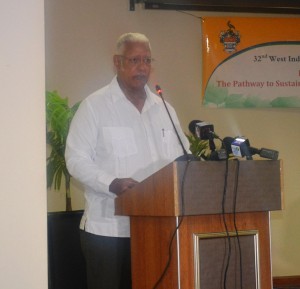 Among the area of focus, the dignitaries will be placing heavy emphasis on food security, climate change, and Agricultural Insurance through a series of presentations and participative discussions. The aim of the conference is to provide innovative findings which can be incorporated to reduce hunger and achieve a food secured status.

“It is important we take into account, at the same time, diverse perspectives and approaches. To consider very technical issues such as animal health, plant pests; and also economic perspectives, households, and policies given that all of these make up the food system. Also, we must be cognizant that all of these, and their interactions, are going to be modified by climate change.” Minister Holder stressed.

Guyana has made significant strides in achieving a food secured status and is among the six countries in the region to have achieved the Millennium Development Goal (MDG) on hunger.

But while this has been a positive indicator, the Agriculture Minister called for more to be done at the level of CARICOM with an important first step being an improved knowledge on the agriculture-nutrition-health nexus.

“We need to promote “smarter” growth by learning more about the health and nutrition impacts of agricultural development. Important steps to build up this knowledge base include investments in research, evaluation and education systems capable of integrating information from all three sectors,” the Minister said.

With the acquisition of such knowledge, enhanced agricultural strategies can be developed with the aim of minimizing risks while maximizing the benefits across the entire value chain, from production to consumption.

The Agriculture Minister called for a more diversified agricultural production and consumption, through the inclusion of more nutritious food products such as beans, vegetables, fruits and dairy products.

“Equally important is the adoption of improved processing practices and policies, including safer transportation and storage infrastructure which reduces food loss and waste hence the importance of conferences such as these to address these shortfalls,” Minister Holder stated.

After the opening address by Guyana’s Agriculture Minister, presentations were conducted by officials from across the region with a targeted focus on attaining Food and Nutrition Security in the Caribbean. According to the dignitaries, if this is to be achieved direct focus on environmental challenges; propelling Caribbean Agricultural Development through School Feeding Programs; innovations in domestic food marketing in the Caribbean; culture, marketing, and climate change impacts on food security should take center stage. 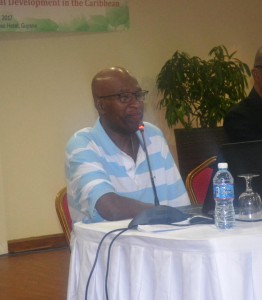 During the first session, Mr. Colin M. Ramsay from the University of Nebraska-Lincoln delivered a detailed presentation on Agricultural Insurance, Farmer Security, and Food Security. He indicated that even though agriculture is one of the most important sectors in developing countries, it is, perhaps, the most vulnerable.

“Farmers everywhere are exposed to extreme events such as droughts, excessive rains and floods, early rains, late rains, hurricanes, and pests and diseases to name a few. Even when such events are absent, farmers have to face uncertain commodity prices at the time of harvest,” he said.

He pointed to some of the services farmers in developed countries should have access to including government subsidized agricultural insurance that makes their income somewhat predictable.

The conference which will conclude on Friday will see Guyana’s Representative to the Caribbean Agro-Economic Society, Mrs. Ida Sealey Adams and IICA’s Sustainable Rural Development Specialist, Mr. Arnold Mendonca, on Thursday, delivering presentations on the Relative profitability of Coconut Farming in Guyana and a case study on the sustainability of Central Mahaicony Perth Village Farmers’ Association respectively.

The 32nd West Indian Agricultural Economics Conference, is being held at the Ramada Georgetown Princess Hotel, Providence under the theme ‘Food & Nutrition Security: The Pathway to Sustainable Agricultural Development in the Caribbean’.