Minister of Public Infrastructure David Patterson told the media today that the residents in the flood affected communities along the East Coast Demerara (ECD) should start getting relief by midnight tonight(Saturday).

Minister Patterson led a Ministerial Taskforce with Minister of Agriculture, Noel Holder and included engineers, government officials, and media operatives on a visit to assess the flooded communities of Buxton and Vigilance on the ECD, in response to recent heavy rainfalls which have left many communities flooded.

Minister Holder provided critical updates on the works being undertaken by his ministry, through the National Drainage and Irrigation Authority (NDIA). He explained that, “We are going to take a pump from Strathspey and move it into Ogle, and by midnight… we will start pumping water from areas such Atlantic Ville, Industry, University of Guyana so that persons living in those areas can start getting some relief”.

Minister Patterson explained that having visited and assessed the areas, the ministry will be undertaking a number of other interventions, some almost immediately. These include the Civil Defence Commission (CDC), distributing sanitation packages to the residents. Others interventions will have to await improvements in the weather, the minister said. 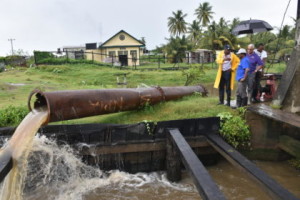 The minister said that the government empathises with those persons that are under water, “I would like to ask them to take precaution over the next few days because the weather forecast does say that we will have rain for the next three days.”

Minister Patterson assured that the government, in collaboration with the Regional Authorities, the National Drainage and Irrigation Association (NDIA) and Guyana Sugar Corporation (GuySuCo), “will do our best to remove the water off the land as quickly as possible”. He reiterated that “relief is on its way” and promised that by next week the residents should have permanent relief.

Buxton is the most affected of all the communities along the ECD that are inundated. Minister Holder explained that the government recognizes and have been moving to address the deficit in the pumping capacity of these and other low-lying companies across the coast. He explained that, “In terms of this area (Buxton) which is one of the lowest areas along the coast, there is a long range solution that we are working on to get in place before the end of 2019.”

Several areas along the ECD remain heavily flooded, following heavy rainfall on Thursday, compounded by high tides and one non-operational pump. One of the three pumps at Strathspey, which serves the area, is non-operational.

A number of pump stations are currently under construction, that would bring vast improvement to drainage in the area, the minister said. Holder explained another “big” pumping station will be constructed at Buxton, another at Vigilance and another at Lusignan, “which should help this catchment area a lot”.

Chief Executive Officer (CEO) of NDIA Frederick Flatts, revealing long term plans to alleviate flooding in the east coast villages said that the expectation is that at least two of the three new pumping stations, which is expected to cost about $600Million would be completed by the next rainy season.