Turmeric production in Region One to be expanded

As part of the spice programme expansion, the National Agricultural Research and Extension Institute (NAREI) is prepared to expand the cultivation of turmeric tubers from 20 to 40 acres in Region One.

Hinterland regions have been recognized as the most suitable areas for spice cultivation, hence the expansion. 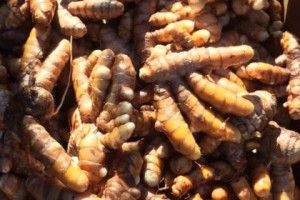 Tumeric after it is harvested

Based on research information obtained by NAREI, spices including black pepper and ginger are produced in Guyana on a large scale. However, more specifically, turmeric is currently produced on a semi-commercial scale.  A turmeric processing factory is expected to be commissioned in Hosororo, Region One to manufacture fresh turmeric rhizomes. This project, will at the same time, provide jobs for persons in the region.

The spices project was re-introduced through a pilot programme which was rolled out in nine of the 10 administrative regions. Other spices are currently being explored for continued production in 2017.