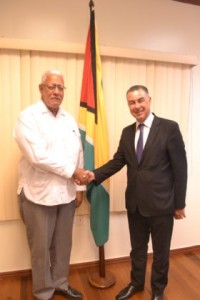 During the meeting between the two officials, a number of areas for possible collaboration were discussed. “We will be exploring the possibilities of opening horizons for investments between the two countries and several other areas where collaboration has been nonexistent. Investment is very important,” Ambassador Roushdy said.

Minister Holder welcomed the Ambassador and said that Egypt and Guyana can share fruitful bilateral relations even as the countries work to enhance relations in all areas and strengthen coordination on the international scene.

Among the many areas discussed for for future were, promoting cooperation between the two countries in the areas of agriculture, environment, political cooperation and water resources management.

Ambassador Roushdy a career diplomat, is the Ambassador Extraordinary and Plenipotentiary of Egypt to the Government of the Federative Republic of Brazil and was the Deputy Assistant Foreign Minister for Specialised Agencies.

The Ambassador previously served in Egypt’s Embassies in Washington and Rome as well as Egypt’s Permanent Mission to the United States and Geneva. Ambassador Roushdy is also an Economics Graduate from the American University in Cairo, Egypt, and speaks fluent English and French.