Guyana’s coconut industry is expected to expand significantly in 2017. The Ministry of Agriculture is currently engaged with its counterparts in Mexico and Brazil to acquire elite planting materials to sustain the growth in the local industry..

Coconut and coconut based food and by products gained prominence in Guyana during 2016.

Chief Executive Officer (CEO) of the National Agricultural Research and Extension Institute, Dr. Oudho Homenauth, said that coconut is a major non-traditional export crop which brought in approximately $5M US in revenue over the past five years.

Dr. Homenauth said one way to grow the industry is through the acquisition of coconut planting materials in its tissue form. He said the tissues will go through a series of laboratory tests before they are transferred to the nursery for actual planting and growth and monitoring.

Nurseries at Mon Repos, Wakenaam and Charity will be operationalised to accommodate more than ten thousand units of coconut planting material. This will complement ongoing works at the Hope Estate on the East Coast of Demerara.

Dr. Homenauth explained that poor selection of coconut types and species negatively impacts the large scale production of coconut. “People have been in the habit of selecting any and every nut for planting purposes and when they realise, when these things are ready to bear, we see the nuts are not of the quality they would have expected,” the CEO explained.

Coconut is one of the crops that has gained the attention of NAREI since there is capacity for farmers to easily access the crop and coastal farmlands are available to accommodate its growth. 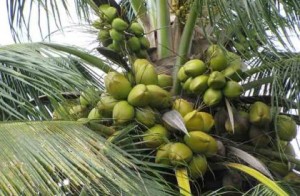 Coconuts before they are harvested

“I know that some people fear that, you know when you do these things the chances are we can bring in pests and diseases into the country. We want to make it absolutely clear, that is something that would not be allowed because the material that is coming in will be quarantined by us initially before it is released,” Dr. Homenauth pointed out.

The expansion of the coconut industry has a ten year road map which was developed and approved in 2016. The road map reinforces the government’s efforts to resuscitate and sustain the local coconut industry. With the road map as a guide, the industry is also expected to move from being underdeveloped to a fully integrated partner at national, regional and global levels.