Stakeholders today, began participating in a two-day National Consultation on Climate Services, intended to guide the development and application of science-based climate information and services in support of decision making in climate sensitive sectors.

The event also seeks to strengthen the interactions between climate service providers and those that utilise the services.

In addition, participants will discuss the use of climate information in decision making in general, and will look at ways to mainstream climate services in four priority sectors of the Global Framework for Climate Service (GFCS): Agriculture and Food Security, Disaster Risk Reduction, and Health and Water.

The consultation is being executed by the Hydrometeorological Service of Guyana, in collaboration with the World Meteorological Organisation (WMO) and the Global Framework for Climate Service (GFCS), Environment of Canada and Caribbean Institute for Meteorology & Hydrology (CIMH).

Addressing the opening session at the Pegasus Hotel, Kingston,Adrian Trotman, with responsibility for the agricultural meteorology programme, CIMH explained that this is the 5th national consultation on climate change services, being executed in the Caribbean. Similar exercises were conducted in Trinidad and Tobago, Belize, Dominica and Suriname, he said, with the intention of paving the way for climate services at the different countries’ national level.

Noting the recently and still on-going drought conditions in parts of the Caribbean, Trotman questioned, “What will be the forecast of tomorrow, or of the rest of the year?” and “should we then be reducing the impact of these extremes? Are they not causing us thousands to millions of dollars, illnesses, and in some part of the Caribbean where tourism is very important, causing some discomfort on guests?”

Observing that  climate extremities  will continue to occur, he explained that “…  the request here, starting today, and continuing tomorrow is that we strengthen our weather climate services, so that we can reduce the impact, those that are negative at least on our society, on our climate sensitive sectors, and just as importantly make the best of  climate services bring .” 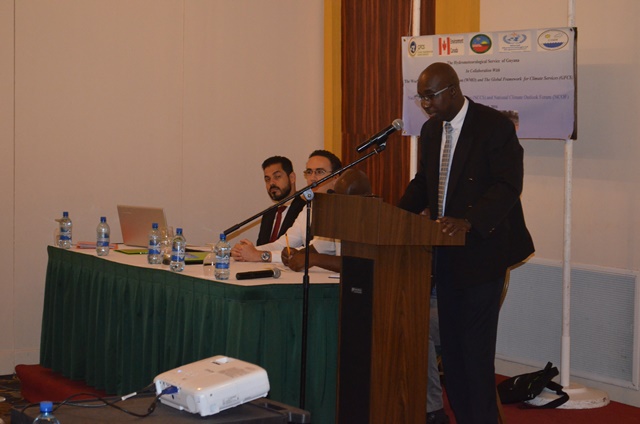 Adrian Trotman, with responsibility for the agricultural meteorology programme, Caribbean Institute of Meteorology and Hydrology (CIMH) addressing the consultation

He pointed out however, that in making use of climate services, there has to be some entity providing the service. He then made an important plug for the national hydrometerological service, observing that “it is that national entity support by regional and international entities that would provide you with that relevant services,” to fight against climate extremities.

Also addressing the gathering was Dr. Federico Gomez-Delgado, National Officer, Office for North America, Central America and the Caribbean, WMO, who noted that the appearance of droughts and floods can set back development efforts for many countries, and hence the need to tackle efficiently the impact of climate virility and change in agriculture, disaster risk reduction, energy health and water among others.

He advised too, the need for the development of proper mechanism to adapt to seasonal annual climate variation. He however, noted that current science-based capability is not yet being exploited to its full potential to benefit society in many countries. 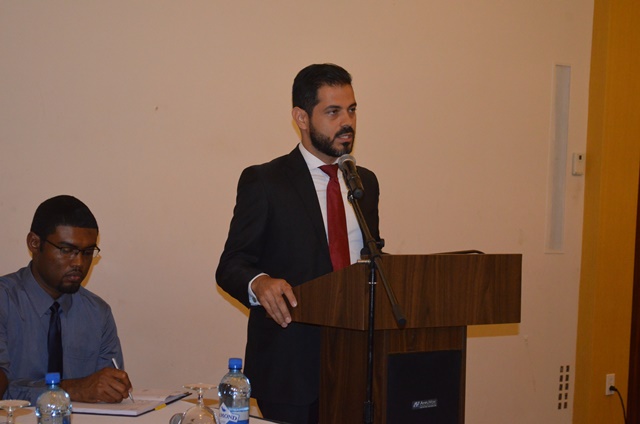 Dr. Gomez-Delgado observed that the major gaps in the demand for climate services and their current availability need to be addressed. He said investments are urgently required to strengthen existing climate observation systems, information management systems, research, and institutional and human capacity.

In fact, he said that currently there are more than 70 countries in the world that do not have the capacity to either develop or effectively apply climate services. To this end, he posited that there need to be enhanced capacities of national institutions; as well as institutional frameworks need to be enhanced in many countries, thus the consultation, to lay out the action plan for this to occur.

Dr. Gomez-Delgado did however, observe that arriving at such a plan needs the support of all actors, working together. “Expanding the production, distribution and use of relevant climate services can be best achieved by polling expertise services through cooperation operation needs,” he said. 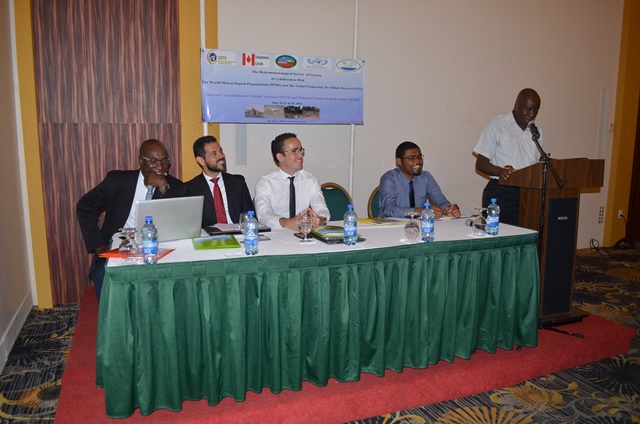 Permanent Secretary of the Ministry of Agriculture George Jervis in his address observed that ‘failure to prepare is prepare to fail’. He noted that, “whilst it is clear that small countries such as ours can do very little to manipulate the weather, we can prepare to deal with it after it arrives. That makes the national consultation on climate services and the national climate outlook forum such a timely exercise,” he added.

Meanwhile, Deputy Chief Hydrometeorological, Officer, Dr. Garvin Cummings, assured that “in recent years, hydromet has been seeking to build capacities and establish partnerships with other organisations.” 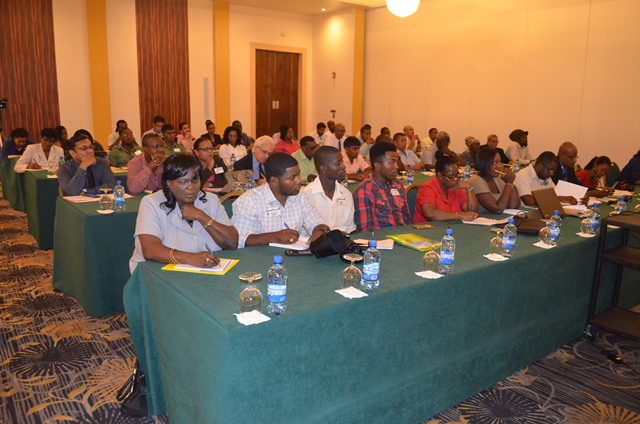 A section of the gathering at the National Consultation on Climate Change at the Pegasus Hotel, Kingston

Additionally, a National Climate Outlook Forum will be held on May 19, at the same venue.