Rice is doing much better than it was a year ago, and this has been made possible as a result of several interventions, including drainage and irrigation.

Minister of Agriculture Noel Holder speaking to the Government Information Agency (GINA) said last year, “We had the tremendous rainfall and the National Drainage and Irrigation Authority (NDIA) was able to bring relief, tremendous relief to the coastland …. I think in Region 2 and Region 6 and this brought tremendous relief flood-wise. Rainfall is on right now, as you know and flooding is not occurring.”

Apart from preventing floods, the Minister pointed out that, “During El Nino… the NDIA was able to bring water by tapping creeks further upstream to give farmers relief on the coast. So of the areas planted, only about 4 percent (of the rice crop) was lost due to El Nino situation. So I think that that shows how effective the NDIA efforts have been.”

The Minister explained that despite Guyana losing the Petro-Caribe market shortly after the coalition government took office in May 2015; rice is in a much better situation market wise. He said  that the government has been exploring and establishing new markets, and has been able to increase the market share for Guyana’s rice, “at prices above world market prices so the rice industry is not really in that much crisis as people try to say.” 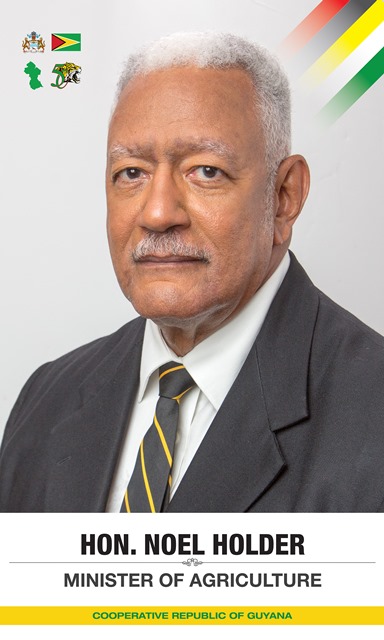 Amidst calls by the opposition People’s Progressive Party/Civic, for Guyana to re-enter the Venezuelan rice market, the minister said, “Guyana has met all the shipments to Venezuela, but Venezuela will not, bearing in mind the price of rice and  oil prices now hovering around US$30 a barrel or slightly above, enter into a similar agreement.”

As a matter of fact, the minister pointed out, that currently Venezuela’s agreement with Suriname is almost half the price of the Petro-Caribe agreement or slightly more than that, “So to go back with Venezuela wouldn’t really be any big advantage to farmers.”

The government however has since garnered new markets. According to Minister Holder, “we have developed now the Panama market… we have extended our market in CARICOM. Our Jamaican market should be almost double what it was last year, and we are also trying to finalise an arrangement with Mexico as a new market.”

Guyana signed agreements with two Jamaican companies to purchase 80,000 tonnes of the country’s rice, per annum. The companies have agreed to pay the Guyanese millers US$400 per tonne.

Panama has agreed to purchase over 11,300 tonnes of rice per annum from Guyana. More than 50 percent of this contract has already been serviced.

Projecting the future of rice, Minister Holder believes the time has come for Guyana to not only increase production on the coastland, but to move cultivation inland to the intermediate savannahs and focus on Manaus, Brazil with its almost two million population and within close proximity to Guyana, to capture the Brazilian market.