─ three grounds to be cleared and transformed

─ “the idea is to have a safe space where youths in two communities can engage in sporting activities such as cricket and football, and space where the elderly can exercise” – CDC Committee Member

After more than two decades, East Bank Demerara residents will have several grounds which will be developed into safe spaces for recreational activities. Two of the grounds are located in Diamond in the sixth and eleventh avenue and while the other is located at Golden Grove. 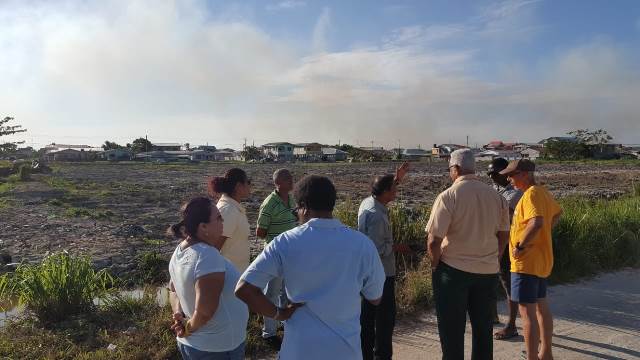 Minister of Agriculture, Noel Holder along with Minister of Business, Dominic Gaskin and Chief Executive Officer (CEO), National Drainage and Irrigation Authority, (NDIA) Fredericks Flatts inspecting one of the grounds cleared in Diamond with members of the Community Development Committee.

This new development was facilitated by the Ministry of Agriculture following a request by the Community Development Committees (CDC) of the two communities to have the grounds cleared.

Committee member of Diamond CDC, Alison Mohamed, in an invited comment to the Department of Public Information (DPI), said that initially help was sought from the Neighbourhood Democratic Council (NDC) to clear the grounds but they did not have the capacity to do so.

On Sunday, Minister of Agriculture, Noel Holder, Minister of Business, Dominic Gaskin, Chief Executive Officer (CEO) of the National Drainage and Irrigation Authority, (NDIA) Fredericks Flatts carried out an inspection of the grounds. 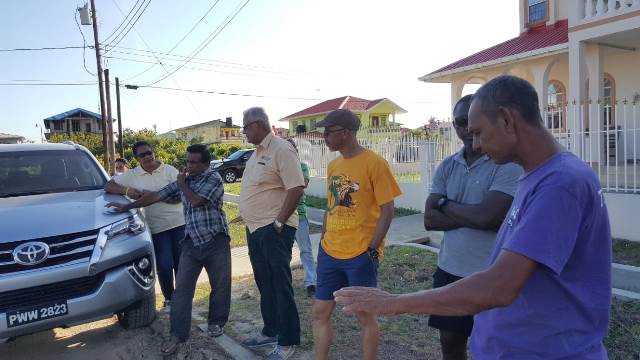 Minister of Agriculture, Noel Holder [third from left] alongside Minister of Business, Dominic Gaskin interacting with members of the Community Development Committee (CDC)

Mohamed pointed out that when the Committee approached the Agriculture Ministry, they immediately intervened and gave aid to have the grounds cleared. She said that the two grounds have been completely cleared of vegetation. It was explained that the machine will be heading to Golden Grove, today to clear the ground in that community.

Once the grounds are completely cleared, the communities are expected to host fundraisers and will be seeking the assistance of the private sector to further develop the grounds. The idea, according to Mohamed, is to have a safe space where young people in the two communities can engage in recreational activities, such as cricket and football, and space where the elderly can exercise. Mohamed is optimistic that by next year the two grounds will be ‘a thing of beauty’.