With government working steadfast to secure additional and larger markets for Guyana’s produce, the Guyana Marketing Corporation (GMC) recorded a 25% increase in non-traditional exports for 2017. 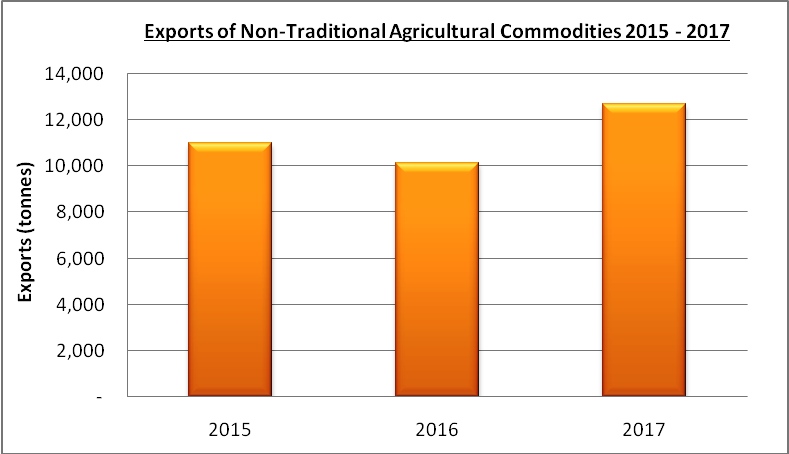 This was announced by GMC’s General Manager, Mrs. Ida Sealey-Adams, who stated that the non-traditional exports which totaled 12, 684 metric tonnes, valued US$17 million.

The Guyana Marketing Corporation (GMC) has over the last year been actively developing new and improved initiatives geared at strengthening its capability to facilitate constant increases in export. Recently, the Corporation through its packing facility resuscitated the Export Association.

According to the General Manager, “This is intended to build a closer network linking our farmers and exporter to markets, while at the same time, building security with buyers allowing for more confidence in our produce,” she said.

In an invited comment, Agriculture Minister, Noel Holder, said that while the non-traditional agricultural sector is yet to reach its full potential, efforts are apace to ensure that this becomes a reality.

Already investment at the governmental levels are in place and has seen the incorporation of machinery and support services given to the GMC to ensure its mandate services are carried out.

“We are continuously looking to increase investments in inputs to improve the competitiveness of domestic production, increase farmers’ profits and make food more affordable for all classes of people.” Minister Holder said.

GMC’s Regional exports increased by 22% from 1,779 in 2016 to 2,179 metric tonnes in 2017 with countries like Barbados, Trinidad & Tobago, Suriname, St. Kitts and Antigua being the major regional export destinations.

In addition, Extra Regional exports to countries like the United States of America, Canada, France and the Dominican Republic also increased significantly with a total of 10,506 metric tonnes being recorded for 2017 when compared to 2016 figures which stood at 8,344 metric tonnes.

The GM also stated that 2017 was recorded as the highest year for pumpkin export over the past three years with 465 metric tonnes exported mainly to Barbados and Antigua.