The Guyana Marketing Corporation (GMC) through a collaborative effort with the Promotion of Regional Opportunities for Produce through Enterprises and Linkages (PROPEL) and the Inter-American Institute for Cooperation in Agriculture (IICA), recently facilitated a Cost of Production Workshop targeting farmers and agro-processors.

The workshop which was held at the St. Ignatius Village, Region 9 was aimed at better equipping farmers and Agro-processors with the knowledge to identify and compute input costs for their farming or agro-processing operations.

It served as a follow-up to the fact-finding mission which was undertaken last November by personnel from the Guyana Marketing Corporation. During last year’s interactions with the stakeholders, the team recognized the shortfall which often results in flawed management decisions made by producers. 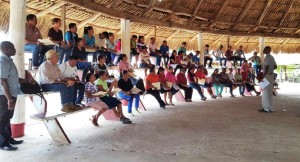 Forty-seven participants from the villages of St. Ignatius, Parshana, Moco-Moco, Shulinab, Quarrie, Nappi, Bina Hill, Surama Aranaputa, and Annai benefitted from the cost of production training for the production of peanuts, cassava bread, pepper sauce, plantain chips and guava jam.   Notably, the model that was used during the workshop also enabled participants to calculate other costs of production.

General Manager of the Guyana Marketing Corporation (GMC), Ms. Ida Sealey Adams in an invited comment stated that the benefit from such a workshop remains an important component if farmers are to boost their production level and take advantage of the opportunities which exist.

“The benefit of which is not limited to being in a better position to negotiate prices offered to them for their produce,” she said.

“In addition, GMC is cognizant of the importance of developing and expanding agriculture business enterprises. Of paramount importance to farmers, Agro-processors and Agricultural marketers are the ability to sustain markets for their commodities,” Sealey-Adams said.

As such, one critical service that is provided by the Guyana Marketing Corporation is a collaboration with stakeholders in the development of Agri-businesses to realize their full potential. To this end services that are provided by the Agriculture Business Development unit include: 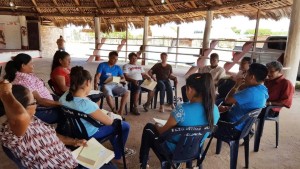 A group session at training workshop