IICA lends support to Agri. Ministry to assist flood-affected residents of Regions 7 and 8

The Inter-American Institute for Cooperation on Agriculture (IICA) today handed over a number of farming equipment and seeds to the Ministry of Agriculture as part of the ministry’s efforts to assist flood-affected  persons in the Regions.

The presentation was made by IICA’s Country Representative, Mr. Wilmot Garnett in the compound of the Agriculture Ministry. Accepting the donations on behalf of the Ministry was Permanent Secretary (ag) Mrs. Joylyn Nester-Burrowes. 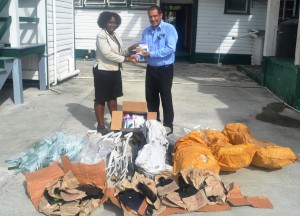 In thanking the institute for the donation, the Permanent Secretary (ag ) expressed gratitude for the assistance which remains a timely one, pointing to the role IlCA continues to play in agricultural advancement.

“We are thankful to IICA for this much needed donation. IICA was the first partnering organization to answer the call to collaborate with us to assist persons who were affected by this crisis. These items will assist the persons with getting back to their agricultural practices in order to provide for their families.” Mrs. Nester Burrowes said.

Mr. Garnet stated  that the organization saw the need to lend assistance to the affected persons given its continued efforts to support Member States in achieving agricultural development and rural well-being. 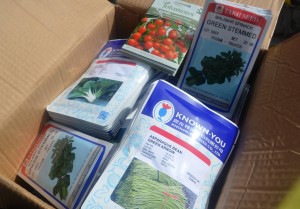 Some of the seeds that were donated

The donation comprised of fruits and vegetable seeds and other basic gardening tools like machetes (cutlasses), forks, spades and gardening hoes. The items will be handed over to the Civil Defence Commission (CDC) today for distribution.