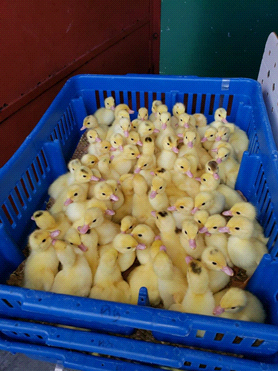 Some of the imported ducklings

This was according to Chief Executive Officer Nigel Cumberbatch, who said the ducklings would serve as breeding material for the authority.

“These ducklings were imported from the USA and they were declared free of any infectious or contagious disease such as Duck Virus Hepatitis, Duck Virus Enteritis, Cholera, Salmonella and other such diseases by the United States Department of Agriculture. The hatchlings from this importation would be sold to the farming community for rearing for meat production,” Cumberbatch noted.

The Muscovy ducks are used primarily for meat production as the meat is less greasy and contains less fat than the other breeds of ducks. Additionally, male Muscovy ducks can attain as much as 5.5 kg within 12 weeks once proper animal husbandry is practiced.

GLDA has the responsibility to ensure it continues to support a vibrant livestock industry which provides safe food for the population and generates income for rural and urban households, all while making optimal use of available resources and competing with producers beyond its borders.

The general public and all livestock farmers in particular, are reminded that the illegal importation of livestock and livestock products into Guyana poses serious risks to the health of humans and animals as it prohibits GLDA’s ability to ensure that whatever is imported is free from exotic diseases.

Persons are therefore encouraged to give their full corporation to the Ministry to safeguard the health of the nation by reporting any and all instances of illegal animals & livestock product imports (smuggling) to the authority on telephone numbers 220-6556, 6557 or via email at glda1910@gmail.com or the nearest Police Station.