Guyana/US to explore areas for collaboration in agriculture

Bilateral relations between Guyana and the United States notable in the areas of agriculture can see possible future collaboration as the two country looks towards areas of development.

Today, newly accredited U.S Ambassador to Guyana Mrs. Sarah-Ann Lynch, paid a courtesy call on Agriculture Minister, Noel Holder. The meeting was used as an introduction to the sector and to look at areas where collaboration might be feasible. 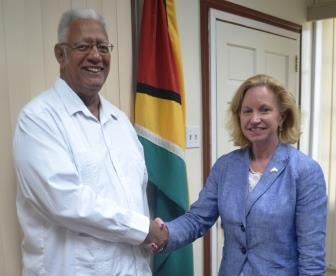 Agriculture Minister, Noel Holder is pictured with new US Ambassador to Guyana, Sarah-Ann Lynch during the courtesy call

Explaining that Guyana was a food secured country, Minister Holder used the opportunity to speak of Guyana’s productive potential especially in the areas of rice, and agriculture diversification and the plan of the Ministry to expand its productive base as a result of rising sea levels due to climate change.

Ambassador Lynch expressed satisfaction at the level of cooperation the two countries share since the establishment of Bilateral Relations over 52 years ago.  The Ambassador said that during her tenure, the two governments will peruse possible areas for mutual cooperation.

A career member of the Senior Foreign Service, Ambassador Lynch has over 25 years of service. She presented her letters of Credence to H.E President David Granger on March 13, 2019.