She was speaking at the launch of the fifth National Climate Outlook Forum (NCOF) hosted by the Guyana Hydrometeorological Service at the Herdmanston Lodge this morning.

According to Dr. Mahon, Guyana is among a few Caribbean countries that convenes a national climate outlook forum. Even in the face of limited resources, she said the commitment of the Guyana hydromet office has consistently engaged sectoral stakeholders in this way.

The National Climate Outlook Forum was introduced to the hydrometeorological service through the Global Framework for Climate Services (GFCS) back in 2016. It is a United Nations (UN) led initiative by the World Meteorological Organisation that guides the development and application of science-based climate information services in support of decision in climate-sensitive sectors, agriculture, being one of them. 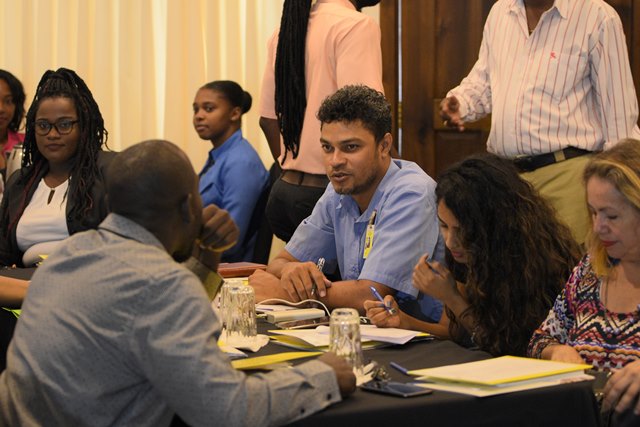 Participants at the event at Herdmanston Lodge

According to Dr. Machon, climate information provided as a service to climate-sensitive sectors, in years or decades in advance, often need to improve decisions, reduce loss and reduce and improve productivity.

“It is also the tailored advice, provided by the hydromet service that will become critical in sectoral decision making in the coming months, with more climate models forecasting a week to moderate El Nino evolving in the next period, what does this mean for deviation in Guyana’s seasonal climate? What does it mean for the sectors that have to adjust to potential variations?” she enquired.

The successful feedback from the initiative has pushed the hydro office to explore other climate-sensitive sectors.

The GFCS currently has as priority, sectors including agriculture, food security, water, health and energy.