Agri-Man, the superhero created to promote the advantages of e-agriculture and small-scale agriculture practices captured the attention of youths attending the Caribbean Telecommunications Union ICT Roadshow.

With the catchphrase, “Plant a tree, Live for free” the CTU’s e-agriculture superhero was part of the session today that focused on educating youth on the ways technology can be utilised in agricultural science, at the Arthur Chung Conference Centre (ACCC).

The superhero disguise was strategic in having an audience of youths channel their interests in a sector which where youths are least likely to pay attention.

“We have seen quite a lot of superheroes but how many of them are from the Caribbean and how many of them would really focus on agriculture in that way that makes a difference? … Agri-Man does!” the superhero declared. 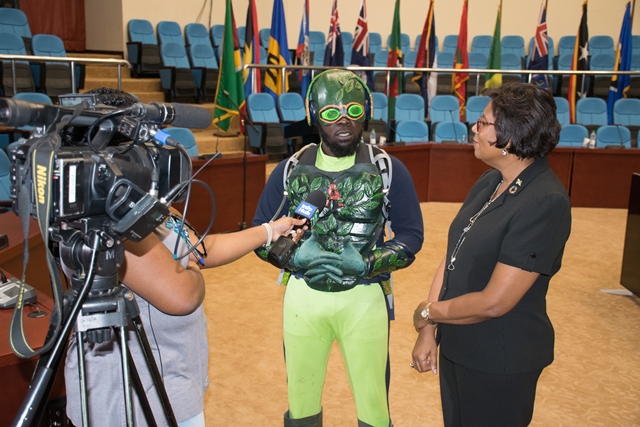 Agri-Man, [centre, in costume] explains his in the company of Minister of Public Telecommunications, Catherine Hughes

There was an overwhelming response to the character by those who attended. Aubrey Sultan, an Agricultural Science student at the University of Guyana noted that Agri-Man was the highlight of the presentations focusing on agricultural and has motivated him to encourage others to farm and grow their own food.

“I realised that all of that hard work that we think is behind agriculture can be made easier through the use of ICT… I encourage all of the persons out there to plant on your own and to not only wait on the government or somebody else to plant for you or to be comfortable with going to the market and buying stuff but plant on your own and you will benefit.” 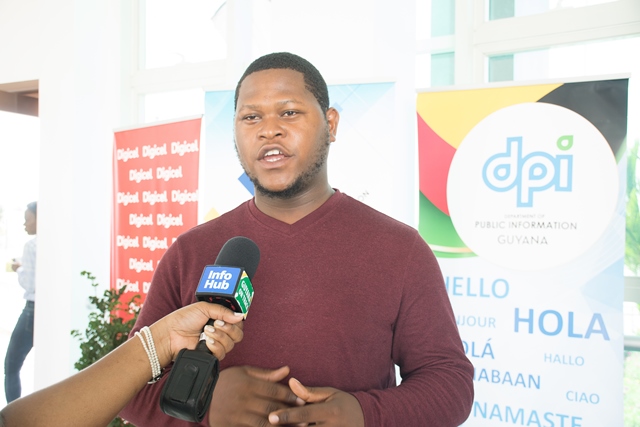 Agriculture Science Student of the University of Guyana, Aubrey Sultan, attended the sessions on e-agriculture at the CTU-ICT Roadshow

Minister of Public Telecommunications, Catherine Hughes who was there engaging the youths said, “we were talking about technology, we really want young people to understand that agriculture has changed and there is a technological way to now do agriculture.”

The Caribbean Telecommunications Union ICT roadshow’s e-agriculture forum also provided fresh perspectives on how government, in partnership with the business community and civil society can take agriculture to a new level by incorporating ICTs.