Guyana’s preparedness to respond to an emergency emanating from an epidemic or any other disaster has received high marks from both local and international observers following a simulation exercise held in Mabaruma, North West District, Region One, earlier yesterday. 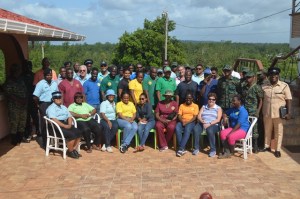 The team which took part in the simulation exercise.

The exercise aimed to evaluate applicability of the emergency preparedness plan; test the Guyana Livestock Development Authority (GLDA)’s ability to respond to an emergency; rapidly contain the possible spread of suspected disease from a focal farm while at the same time establishing the origin of the disease and the extent of its spread, using epidemiological methods according to the preparedness plan.

In keeping with established protocols, there were five teams: Quarantine, Epidemiology, Incident Command, Laboratory and Command and Control, to manage the “report of a possible outbreak of foot and mouth disease” on a local farm in the Brooms Hill community.

Following a simulation of the various steps and procedures to be engaged, in ‘a real-time, real-life situation’, the observers reported their satisfaction with the demonstrated capacity.

Foot and mouth disease specialist and PAHO consultant, Dr. Victor Saraiva said, “I was impressed not only with the epidemiology group’s readiness in observation of the procedures but also with the coordination with those involved when we got to the quarantine check point’s roadblocks, and when we went to the farm everybody was aware of their role, in this event study.”

In addition, International PAHO consultant Dr. Mariano Bonet, said, “there is space for knowledge, in the case of taking the samples…I can congratulate the laboratory team and also the coordination of the team with other teams and the incident commander. That for me is very good. It’s very good to work in this system.”

Director General of the Civil Defence Commission Lieutenant Colonel Kester Craig said the exercise was an overall success, “It is not easy to bring players from several agencies from different parts of the country and make them work as a team.”

Further, the CDC Director added that “from the technical perspective, because I was able to observe the incident command post, the checkpoints, the quarantine and the actual focus area I think for the GLDA it’s important that you know your roles and responsibilities, and take lead with what you have to do and that is what you have demonstrated.”

Meanwhile, Agricultural Health Specialist with Inter-American Institute for Cooperation on Agriculture (IICA) Dr. Maxine Parris Aaron said, “I like the fact that the soldiers the police and the staff worked really well together. They all knew what they had to do. They did it, but they also shared information while there… I must compliment the staff, the residents because nobody quarrelled. They listened to the explanation as to why we had set up the roadblock, and they cooperated.”

For Superintendent Elton Baird of the Guyana Police Force described the exercise as a timely one. He said it provided an opportunity for himself and ranks to become aware of the procedures involved in the management of a declared disaster or emergency area, “When I looked at the whole structure I recognised that this is not only about FMD, but it’s dealing with any kind of disaster and how we can mobilise our resources.”

There were a number of recommendations made for the improvement of the emergency response. Among them was the need to have a more reliable means of communicating with all stakeholders at all times instead of relying on the telephone infrastructure, involve the Regional administration and activate the regional emergency response plan.

It was also recognised that should there be another exercise of a similar nature or a real-life emergency there would be a need for more human resources to minimise the hindrance caused to citizens getting about their business.

There were 57 persons involved in the simulation exercise, 53 on the ground and 4 at the incident command post. They were drawn from several regional and national agencies inclusive of the Guyana Defence Force, Guyana Police Force, NAREI, Ministry of Public Health, Guyana Livestock Development Authority among others. International consultants Doctors Mariano Bonet, Alexandra Vokaty, Maxine Parris Aaron and Victor Sariva were also present as representatives of PAHO / WHO and IICA.

‘Foot and Mouth’ is a highly contagious viral disease which affects cows, pigs, sheep, goats, deer and other susceptible animals with divided hooves. It is a worldwide concern because of its ability to destroy entire flocks of animals leaving seriously negative socio-economic impacts. 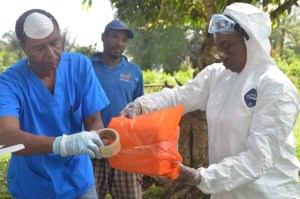 Handing over samples for transmission to lab. 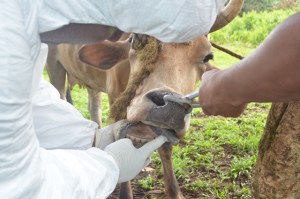 Checking for symptoms of disease in cattle on the quarantined farm and taking samples for laboratory investigations. 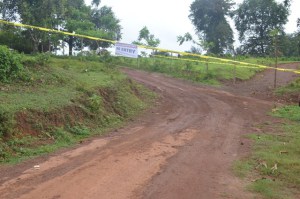