Farmers and residents of New Friendship-Vigilance on the East Coast of Demerara will now benefit from a new $240M drainage pump station that was commissioned today. 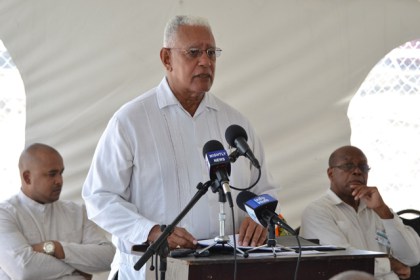 Addressing the gathering at the ceremony the East Coast of Demerara, Minister of Agriculture, Noel Holder said “the Ministry of Agriculture, remains committed to flood risk management for the economic, and social well-being of the Guyanese people and gives its assurance that it will continue to implement aggressive plans and civil works to undertake investments, maintenance and future planning in drainage and irrigation.” 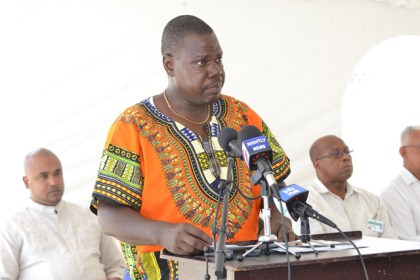 Meanwhile, Chairman of the Buxton-Foulis Neighbourhood Democratic Council (NDC), Forbes Abrams said the installation and commissioning of the new facility coupled with works aback of the village represent a new beginning for the communities following decades of neglect.

“I am hopeful that when all the works are completed that we will realise in this area, a significant expansion in our agricultural output, whether in crops or livestock. I am absolutely optimistic that time will come when we will have grown to the extent that we will need to establish cold storage facilities and warehouses for our abundant production,” Abrams said.

In addition, the NDC chairman urged residents to take ownership of the facility and be guardians of the canals which lead to them. “We need to desist from making our canals the dumping grounds for dead animals and whatever we need to discard from our homes, our yards and our factories. We also need to recognise that we too have a role to play in keeping these canals clean and clear of weeds and bushes so that there can be a free flow of water to the pumps and to the sea.” 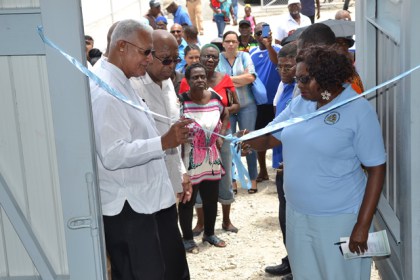 Minister Holder assists in the cutting of the ribbon to officially commission the pump station.

This is the second pump station to be commissioned on the East Coast of Demerara. It is equipped with a 70.6 cusec pump which has the capacity to discharge water at a rate of 31,700 gallons per minute.

Also present at today’s commissioning was the Chairman of the RDC Region Four, Genevieve Allen, officials of the Ministries of Finance and Agriculture among others.