A permanent Livestock Extension Officer of the Guyana Livestock Development Authority (GLDA) has been assigned to Region 8 (Pataro-Siparuni) to address the issue of proper animal husbandry.

This development comes at a critical juncture in wake of a recent spate of high poultry mortality, which was brought to the attention of Agriculture Minister, Noel Holder and team during a recent outreach to the region.

According to residents at Itabac, the problem began some months ago with just a few chickens dying every week. However in recent times as much as 20 died at one go. 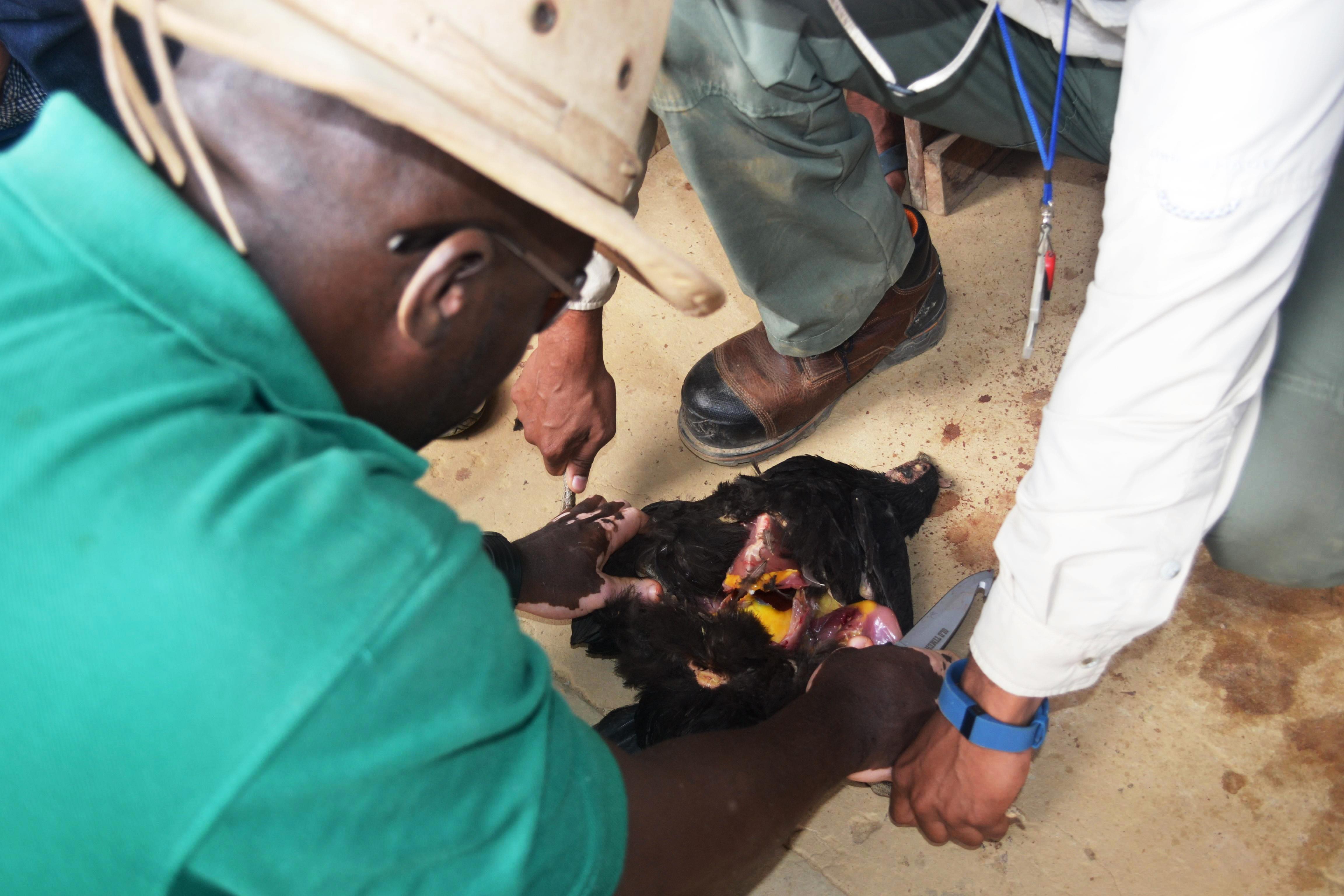 Dr. Waldron while performing the autopsy

In responding to the concerns, Deputy Chief Executive Officer of the Guyana Livestock Development Authority (GLDA), Dr. Dwight Waldron explained that a proper diagnosis would only be possible if the veterinary laboratory is able to conduct an analysis of samples taken from the dead birds.  He advised that the village arrange to have a dead bird sent by air to the city for analysis, the cost for which would be borne by the authority.

The GLDA deputy however undertook an on the spot autopsy of a bird that had just died to determine the preliminary cause of death. At the end of the procedure, Dr. Dwight Waldron determined that there was a high rate of parasites and signs of hemorrhage in the intestine.

“When you look at the colour of the feces it is consistent with coccidia and electrolyte which is a bacteria- the coccidia is a protozoan. The good thing is that both can be treated,” the DCEO said. 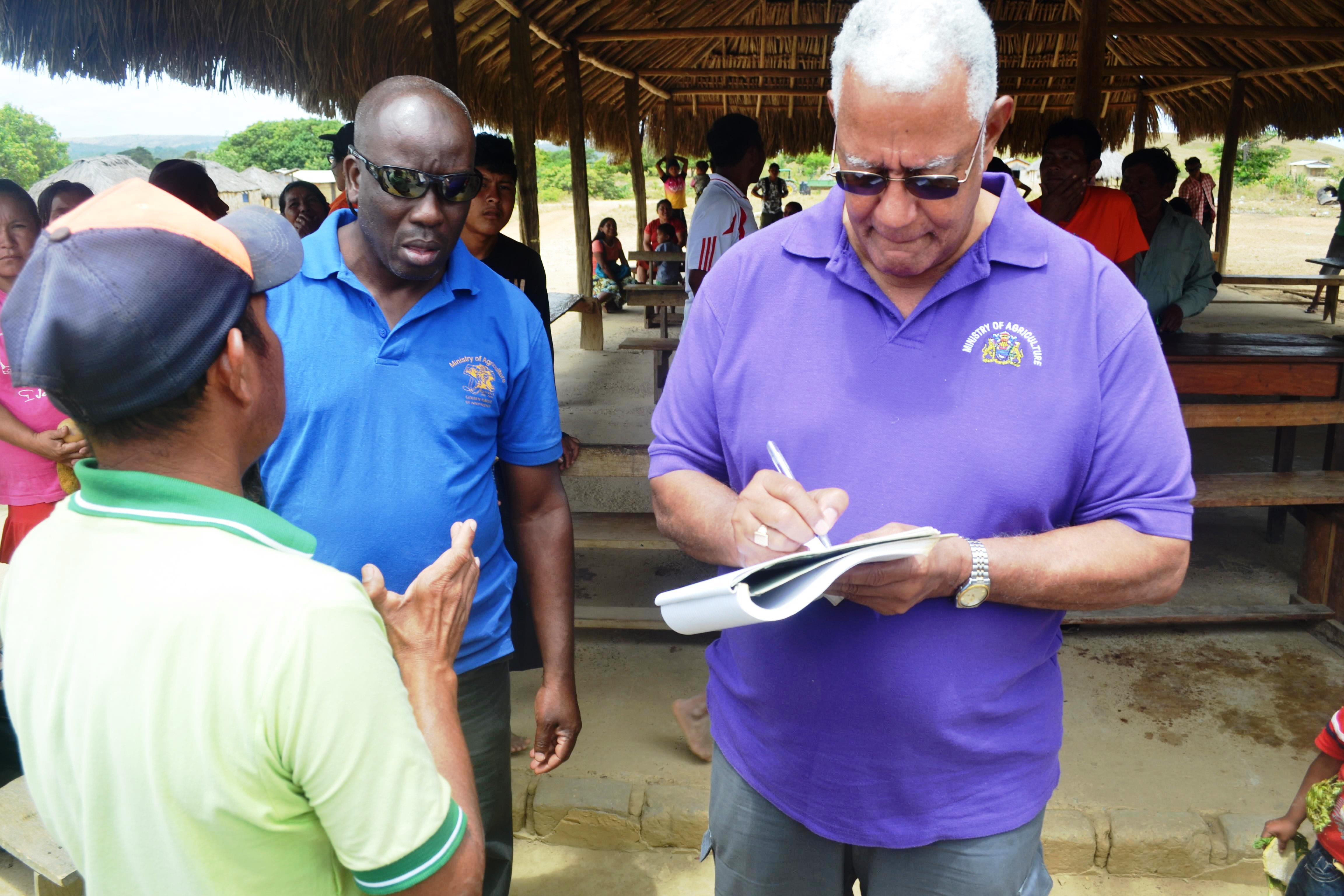 Minister Holder while collecting a report from the village toshao

The findings also showed congestion in the lungs due to the infection. According to the Authority’s Deputy Chief Executive Officer, proper animals husbandry is important not only to ensure there is no loss of birds but to ensure diseases are not transferred during consumption.

“It is important that you follow the advice of our extension officers when it comes to feeding your animals…in addition to feed, probiotics are also important,” Dr. Waldron said.

The Toshao of Itabac, Alexander David, and Regional Councilor, William Peters who were present during the autopsy were advised to look for similar symptoms in the remaining poultry and what medications are to be administered.

Apart from the rearing of local poultry and cattle on a small scale, the Region was encouraged by the Agriculture Minister, to get involved in the rearing of other small ruminants such as pigs, goat, and the chickens as part of the authority’s black giant program.

The Agricultural Development Plan for the region will see farmers and residents accessing quality breeding animals through the Ministry’s Artificial Insemination program.

“The conditions in the region are ideal for sheep and pig rearing and as such, we will ensure the genetics are made available to you,” Minister Holder said.

Guyana has been declared Food and Mouth free status and has been working around-the-clock to maintain the status. In light of this, residents were urged to not be tempted into importing animals from neighbouring Brazil, as this can have a negative effect on the country’s status. 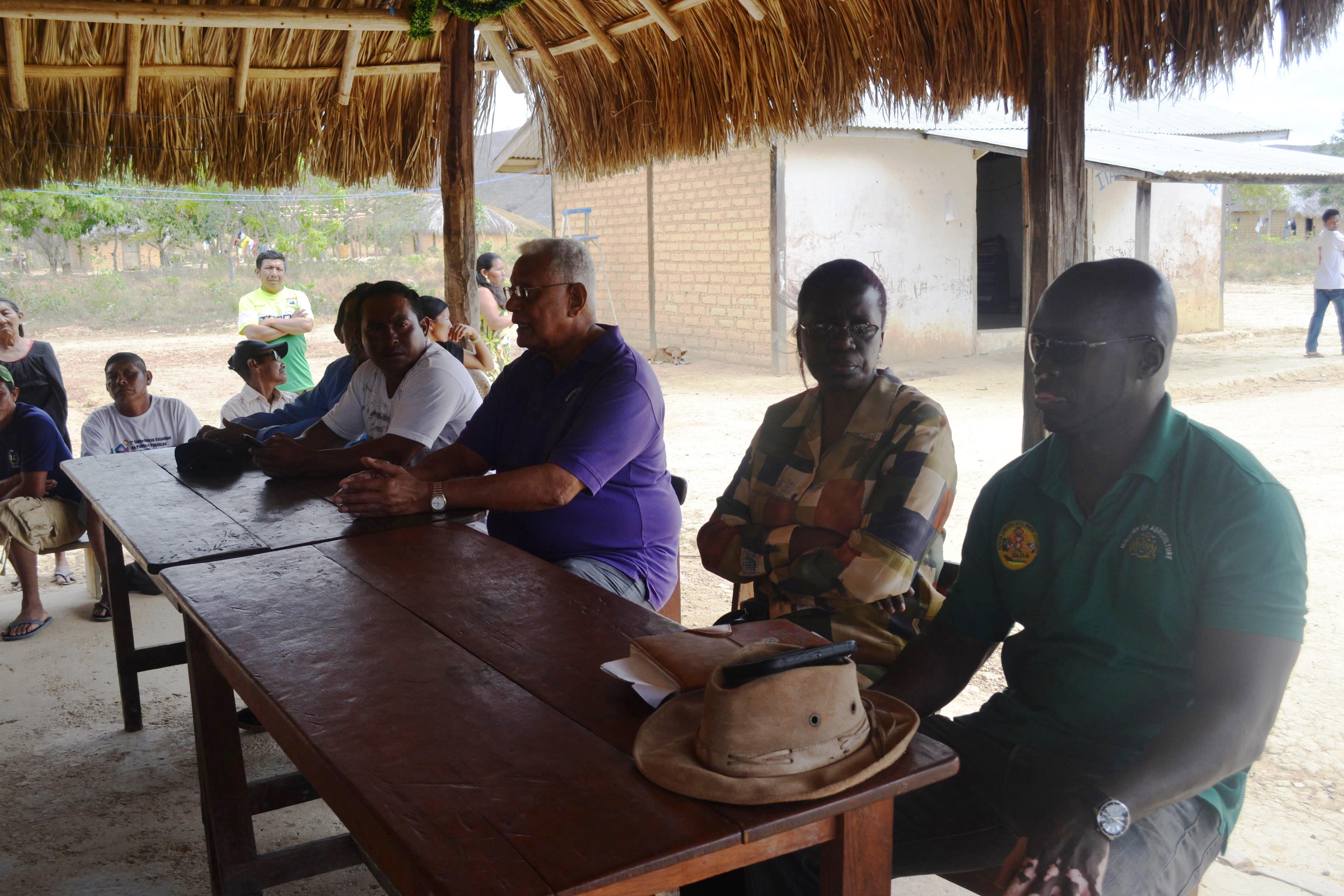 Minister Holder and other officials during a meeting with the residents of Itabac, Region 8

According to Dr. Waldron, while this is not the case, it is necessary to mention so that residents are made aware of the damming effects such actions can have on the country.

“This is why as part of our Agricultural Development Plan for the region, we are making the animals available to you to ensure that such incidences are avoided…” he noted.

In the event an animal is found with the food and mouth disease, the Guyana Livestock Authority (GLDA) would be forced to slaughter all animals in the region and embark on a countrywide Livestock Health and Production Sensitization program.

This he said would have implications for Guyana’s current status as a country free from Foot and Mouth disease.

The residents were assured that there is no need to buy vaccines for Foot and Mouth disease as is currently the practice, as Guyana is free of the disease, and has been so for more than a decade.