At the investiture ceremony of Mr. Manuel Otero as the new Director General and highest authority of the Inter-American Institute for Cooperation on Agriculture (IICA), national and international authorities expressed their support for the Argentinian veterinarian’s vision to foster rural well-being under a humanist approach and to ensure that rural areas figure more prominently in creating hubs for progress. 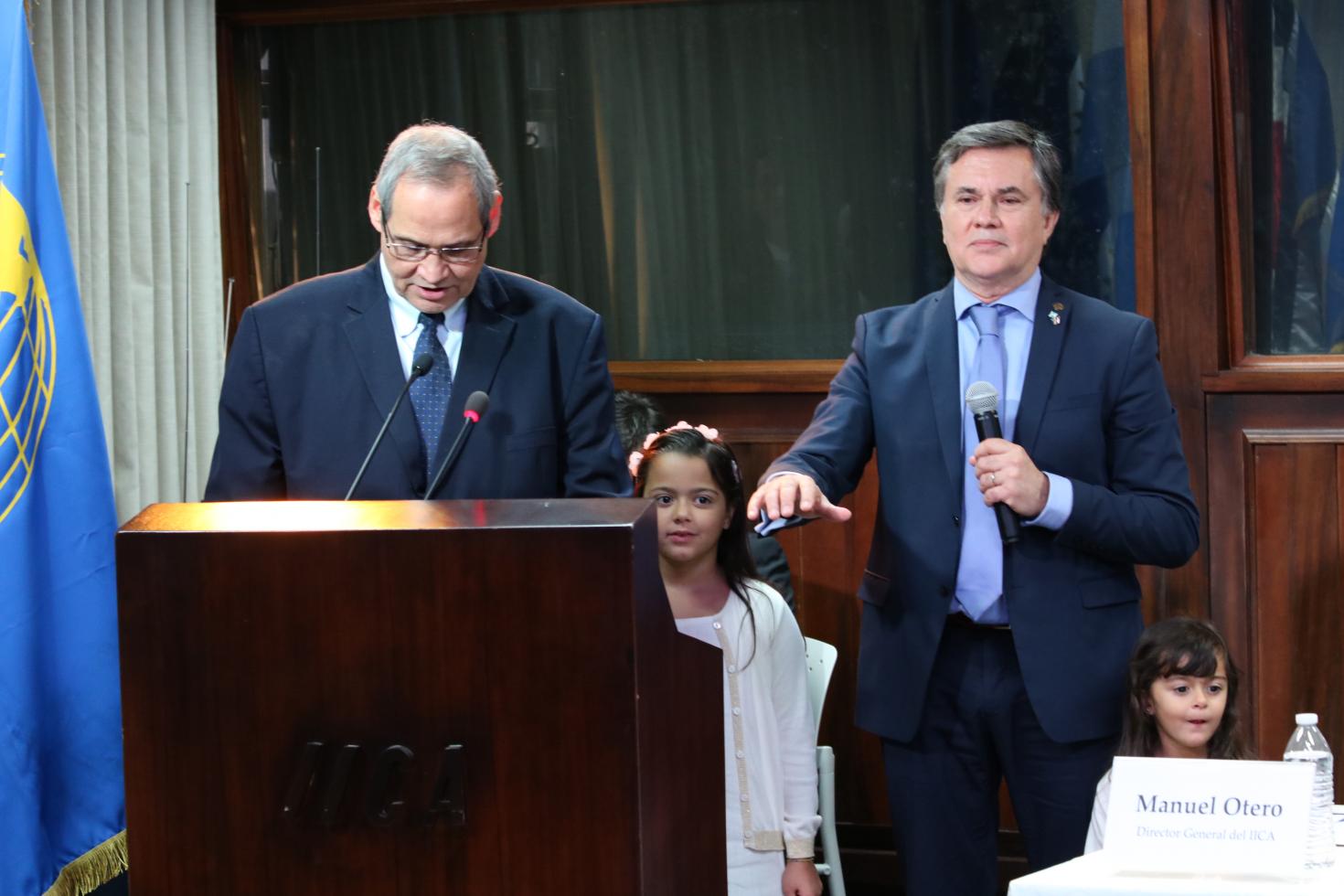 The attendees expressed their conviction that 66-year-old Otero would run a successful administration (during the 2018-2022 period), and encouraged him to fulfill his vision, which coincides with one of IICA’s main objectives.
“Since the 1940s, IICA has had a clear understanding that well-being must be sought in rural areas. At the heart of this entity’s work lies a primary concern: people. Agriculture is not just production; it is also people. The core aim of all of our efforts must be the people who produce, those who participate in generating food and well-being,” stated Luis Guillermo Solís, President of the Republic of Costa Rica.

The Costa Rican president added that, although efforts have been undertaken to improve living conditions and implement technological innovations in those areas, “the rural milieu has been cast aside, and improving the connectivity of these regions continues to be a challenge.” He explained that in order to guarantee rural well-being, it was necessary to develop public policies that are not solely related to agriculture.

“Rural areas have the least amount of health and education services. In these areas, communication is more delayed, water for human consumption is more polluted, and animals reared for our own well-being are the skinniest. As a result, there is a lack of rural well-being,” stated Solís.

Agriculture: the backbone of our economy

On the other hand, Néstor Méndez, Assistant Secretary General of the Organization of American States (OAS), highlighted the role played by agriculture as the main driver of economic growth in most countries of the hemisphere, and underscored the importance of supporting actions carried out by IICA to strengthen this sector, under Otero’s leadership.

“Agriculture is the foundation of many of our countries. Efforts to address these challenges must be pragmatic and systematic, in order to engender an agricultural sector that is productive, sustainable, resilient and inclusive. We must find ways to make agriculture attractive to women and youth, by optimizing opportunities for employment across the region and creating avenues for broader participation through education, technology and innovation,” stated Méndez.

The Secretary General of the Central American Integration System (SICA), Marco Vinicio Cerezo, echoed Méndez’s statements and announced the official signing of a technical cooperation agreement with IICA.
“We share the Institute’s perspective that the State, the economy, integration systems and international cooperation must focus on improving living conditions for the population. Public policies, the rural economy and agriculture should interact with and serve the people: the human beings that live and work in rural areas and communities,” stated Cerezo.

Mariano Caucino, Ambassador of Argentina in Costa Rica, and Santiago Hardie, Secretary of Family Farming, Coordination and Area-based Development of Argentina, expressed their satisfaction with Otero leading IICA over the next four years, under a vision focused on rural well-being.

“Our government has set out to reduce poverty in all its dimensions, and cannot help but share IICA’s vision of achieving an Inter-American agriculture that is competitive, inclusive and sustainable, and capable of feeding not only the region, but also a significant portion of the world’s population. For this reason, we highly value the Institute’s efforts to drive agriculture’s contribution to the development of territories, rural well-being and food security,” concluded Caucino.

The investiture ceremony of Manuel Otero as head of IICA was held at IICA Headquarters in San Jose, Costa Rica.