JUST last week, Agriculture Minister Noel Holder had cause to caution Black Bush Polder farmers that they need to change with the times; to do things a bit differently if they want to survive in this business called agriculture. 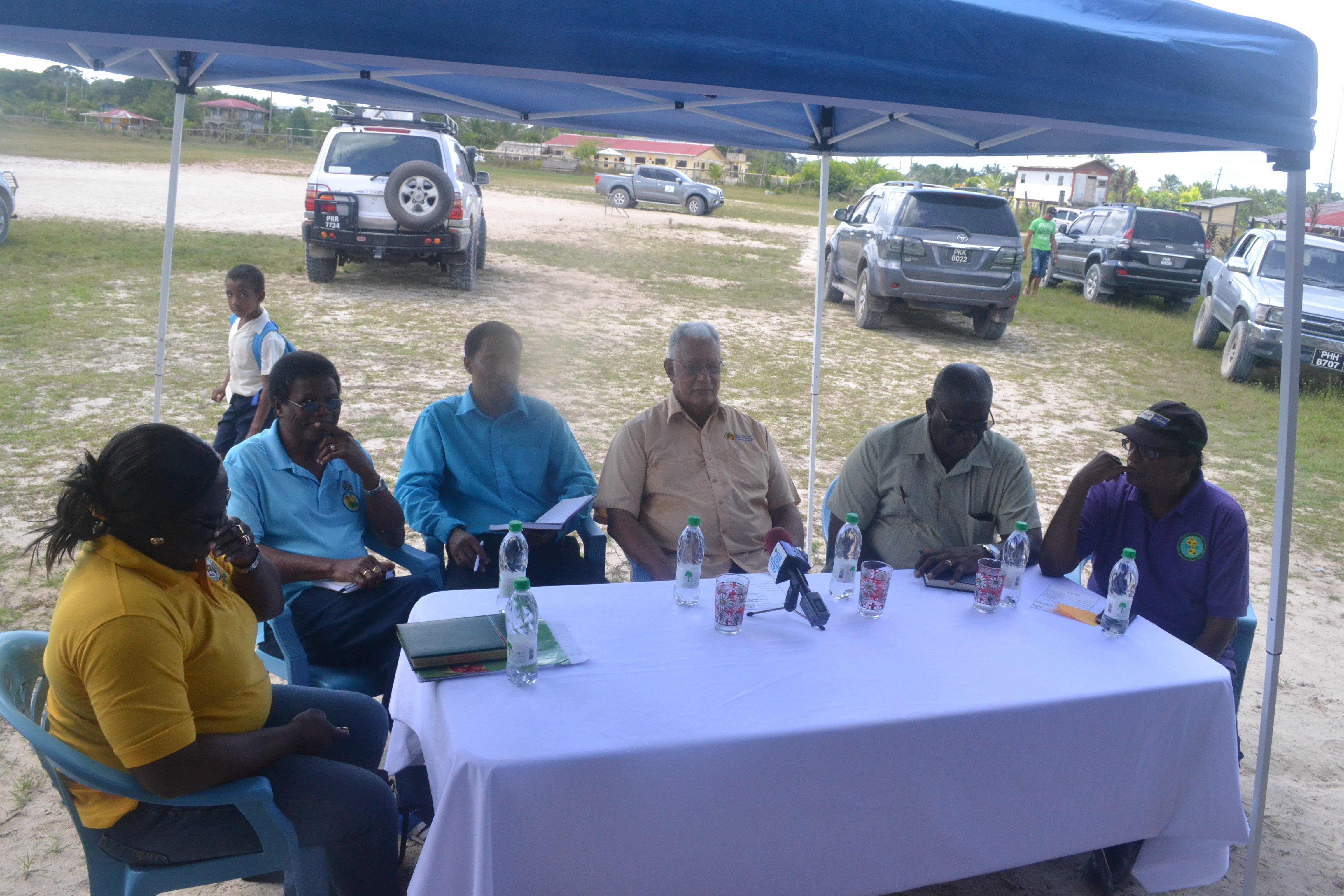 He urged that they practise what he calls “market-led farming”, which, in layman’s terms, simply means that they need to know what is in season and just capitalise on it.
This week, he was at Coomacka, in Region 10 (Upper Demerara-Upper Berbice), taking with him the same message, but this time around, he had the backing of Chief Executive Officer of the National Agricultural Research and Extension Institute (NAREI), Dr. Oudho Homenauth.

Noting that NAREI has offices in every region of the country to assist farmers with crop-development initiatives, Dr Homenauth said:
“We always encourage persons to look at crops that are adaptive to the soil-type in their respective regions.

“Our station at Kairuni gives farmers a clear idea of the crops that can be grown in the region. Crops like soursop, lemons and moringa (better known as saijan) are always in demand, and they have a very high market value.”
And while on the subject of marketing, he also encouraged Coomacka farmers to make good use of biopesticides to control pest-infestation, as they are more cost-effective alternatives that can be used without having to increase one’s cost of production.

A section of the farmers attending the meeting

Biopesticides are certain types of pesticides derived from such natural materials as animals, plants, bacteria, and certain minerals. For example, canola oil and baking soda have pesticidal applications, and as such are considered biopesticides.
Also on hand during the Coomacka walkabout with the agriculture minister was Chief Executive Officer of the Guyana Livestock Development Authority (GLDA), Mr Nigel Cumberbatch, who used the opportunity to remind Coomackans of the region’s history in poultry-rearing.

“Develop farming systems where nothing is wasted; start in the schools. GLDA will donate 100 chicks to the Coomacka Primary to give you a start to poultry-rearing, providing that you build the pen. Our officers will guide you on the specifications and standards for its construction. Once that is done, I will honour GLDA’s commitment to donating the birds.”

He also told them of the artificial insemination (AI) programme that the agency has ongoing in several regions of the country, and encouraged the farmers of Coomacka and neighbouring communities to make use of these and other services the GLDA is offering.
Mr Accabre Sepaul, an entrepreneur and consultant from Three Friends Village, indicated that while there are many farming groups within the communities, they are oftentimes not on the same page where adopting strategies are concerned to take agriculture to the next level.

COLLABORATIVE EFFORT
Said he: “Groups need to have a collaborative effort when it comes to agriculture.
“Develop a strategic plan, stating clearly what you as farmers and community representatives want to achieve; that can be the first step to getting things going in the region.”

While persons were being encouraged to plant specific crops, General Manager of the Guyana Marketing Corporation (GMC), Ida Sealey-Adams, urged that they ensure that their produce can survive on the market in terms of competitiveness.
“Marketing involves cost of production, quality assurance, proper packaging and consistency of supply,” she said, adding:

“At the end of the day, your produce must be competitive; you will be competing with products coming into the region. Small farmers need to act collectively to maintain consistency, because, once you can produce and supply, opportunities exist for your products to thrive.”

Drainage and irrigation issues, particularly that of sand and water getting into the homes of several persons in the village were brought to the attention of Minister Holder.
In addressing those issues, Chief Executive Officer of the National Drainage and Irrigation Authority (NDIA), Fredrick Flatts, assured the residents that measures are already being put in place to resolve them.

“The ministry has met with representatives from other ministries to look into the issue,” Flatts said.
“We are well aware of the issue, and solutions have been conjured up. We are currently awaiting funding to implement these solutions.”

D&I MATTERS
Chairperson of the Siberian-Old England Farmers’ Group, Gina Fredricks, indicated that some of the villages are still faced with drainage issues, specifically stating that some canals need to be cleared.

In responding to this, Flatts indicated that works are continuously being carried out in the region, and that the authority is hoping to soon add another long-boom excavator to Linden, bringing the number of equipment being deployed to four.

At the end of the day’s proceedings, Dr. Homenauth handed out ant bait to a number of farmers who were having issues with Acushi Ants.
Farmers indicated that these ants were causing major damage to their farms and that the bait will assist them greatly with preserving their crops.

USING BIOPESTICIDES
Among some of the advantages of using biopesticides are:
* They are inherently less toxic than conventional pesticides;
* they generally affect only the target pest and closely related organisms, in contrast to broad-spectrum, conventional pesticides that may affect organisms as different as birds, insects and mammals; and thirdly,
* they are often effective in very small quantities and decompose quickly, resulting in lower exposures and largely averting the pollution problems caused by conventional pesticides 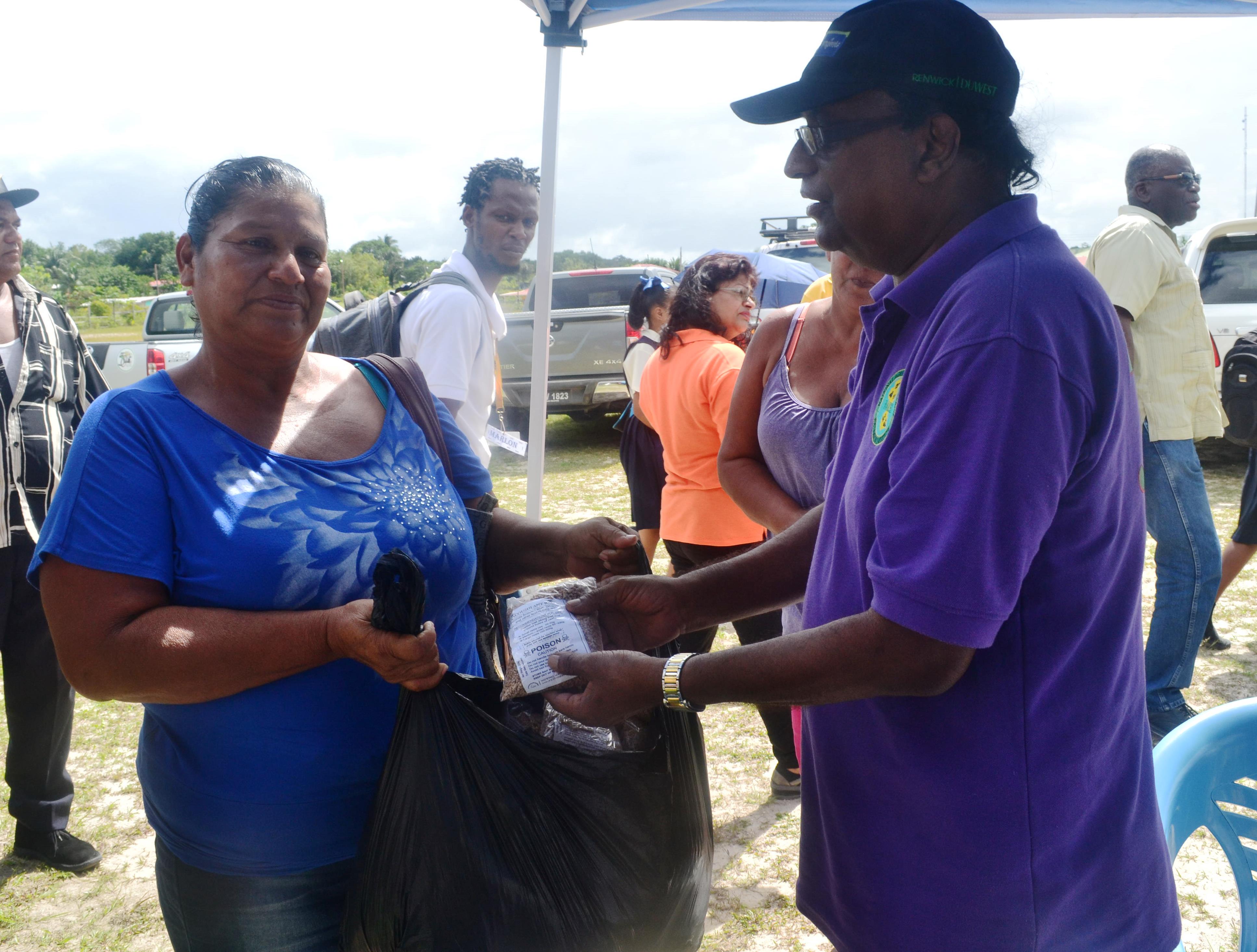