National framework for governing sugar industry has to evolve-Min. Holder

Minister of Agriculture, Noel Holder said today that the country’s framework for governing the sugar industry has to evolve in order to reduce vulnerabilities, resolve institutional and legacy issues and diversify away from sugar to more sustainable industries. 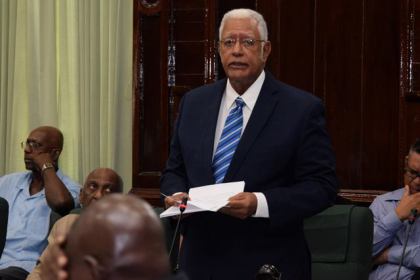 In his address to the National Assembly, the Agriculture Minister said since taking office, the government has supported the sugar corporation with some $32 Billion, a $6.3 Billion allocation in 2018 and will see another $2.3 Billion in 2019.

And while a $12 Billion capital investment will be required over the next three years to ensure that the sugar production targets are met, there has not been any positive impact on the financial state of GuySuCo.   Holder noted that the economy cannot afford this.

“The corporation commenced the implementation of the plans for the sugar industry as set out in the State Paper. The plans call for three estates Albion, Blairmont and Uitvlugt to continue with its canes and sugar operations. Skeldon will be divested, Rose Hall Providence and Enmore are to be divested or diversified and Wales is scheduled for diversification.”

According to Minister Holder, Uitvlugt cane farmers will account for over 50 percent of the canes supplied to the factory and every effort will be made to increase in this proportion.

Meanwhile, to further counteract the effects of the changes in the European Union (EU) sugar regime, Minister Holder said GuySuCo is looking to produce plantation white sugar for marketing into the local, Caribbean Community (CARICOM,) and USA markets.  With other CARICOM sugar-producing countries also plannning on producing plantation white sugar, he said the strategy is to displace the importation of refined sugar regionally. The application of a Common External Tariff (CET) on extra-regional refined sugar would also greatly assist in this regard.

Minister Holder said the Unit costs of production is expected to decrease to 24.5USc/lb sugar. However, there are a number of cost saving initiatives which have been identified to assist in lowering the unit cost of production even further.

He said a feasibility study on cogeneration at Albion and Uitvlugt funded by the EU has indicated that cogeneration at both estates is a viable option with the excess power being sold to the National Grid. Another EU-funded study that looks at transitioning down-sized employees to becoming farmers is well advanced. The results of this study will be of benefit to those severed employees who have expressed willingness to transition into farming on lands leased to them by the Corporation.