The Guyana Sugar Corporation (GuySuCo) has been allocated some $6.3 billion to support its reduced operations in 2018, Minister of Finance Winston Jordan has announced. 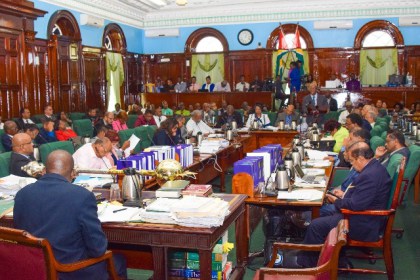 Minister of Finance, Winston Jordan during his Budget 2018 presentation

Presenting the 2018 Budget to the National Assembly on Monday, Minister Jordan said government’s intensified focus on diversification and value-added production in the non-sugar agriculture sector has become absolutely critical at this point as the sugar industry continues to undergo restructuring.

He said it is key to ensuring that the sector remains productive and growth-stimulating.

According to Minister Jordan, the Special Purposes Unit (SPU) in 2018, will be tasked with examining and articulating the way forward with respect to the divestment of the Skeldon, Rosehall, and East Demerara estates. With respect to the remaining estates, the SPU he said, will also work to reconfigure operations to guarantee economic viability.

“Our taxpayers must no longer be burdened to carry the weight of an unprofitable, inefficient, and antiquated public corporation. The government has allocated $6.3 billion, in 2018, to support the reduced operations of GuySuCo,” the Minister said.

Minister Jordan said government intends to uphold its duty to the communities and families in the areas affected by divestment, as part of the GuySuCo restructuring. In order to ensure continued livelihoods, a skills re-training programme is anticipated to be offered for those who choose to pursue new opportunities. He said those who wish to continue with a livelihood in agriculture may see an opportunity to own their own farmland. In addition, he said the Government will assume responsibility for social services, including health centres and community centre grounds.

“We will also undertake critical drainage and irrigation services for the areas affected by divestment,” Minister Jordan said.