The Pesticides and Toxic Chemicals Control Board (PTCCB) and several other agencies attached to the Ministry of Agriculture today honoured students, long-serving staff members and retirees as part of Agriculture month activities. 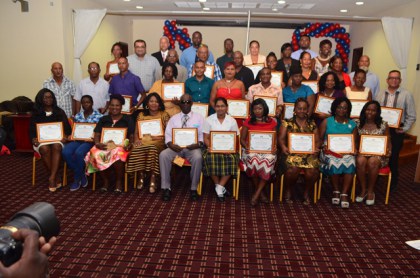 Long service awardees and members of the PTCCB

Students were awarded for their participation in the “Pesticides Awareness in Secondary Schools” competition organised by the Pesticides and Toxic Chemicals Control Board as part of its efforts to sensitise the populace of the dangers of improper pesticide use.

While each participating school received a gift of books, the winners were awarded prizes in the form of agricultural equipment worth $120,000, $100,000 and $75,000 with trophies accordingly.

According to Registrar of the PTCCB, Trecia David, 12 secondary schools were invited to participate in the competition which exposed over one hundred students to information about the responsible use of pesticides and dangerous chemicals.

In brief remarks, Chairman of the PTCCB, Dr. Leslie Munroe reminded that as responsible individuals we all have a duty to ensure that the effects of pesticide use are minimal especially where children are present.

“We don’t want to wait until they become adults to make them aware
of the dangers of pesticide use since they also take the message home and into the communities,” Dr. Munore said.

The programme began in 2012 and has reached more than 50 schools from Regions one to ten thus far.

The feature address was presented by Permanent Secretary (ag) of the Ministry of Agriculture, Joylyn Nestor-Burrow who said it is encouraging to see the willingness of students to educate their peers, parents, and others in their communities on the dangers of improper pesticide use and the risks posed to children.

“Everyone has a role to play so let’s spread the message “Responsible use of pesticides is a significant way of protecting children’s health,” the Permanent Secretary (ag) said.

Permanent Secretary (ag) Joylyn Nestor-Burrows thanked the awardees for their long and dedicated service and encouraged that they continue in this stead.