The Ministry of Agriculture’s focus for Agriculture month 2017 is ‘Food Security and Hinterland Development: A National Priority’, however, this message will be promoted by the government throughout incoming years to emphasise the need for diversification of local agriculture.

The government through the Agri-Ministry is currently engaged in a hinterland diversification programme in which they are now seeking to produce value-added commodities. 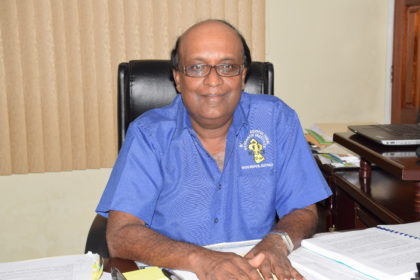 Speaking with the Department of Public Information (DPI), Chief Executive Officer of the National Agricultural Research and Extension Institute (NAREI) Dr. Oudho Homenauth said that the government is now seeking to launch a project which will bring value addition and mechanisation of agriculture to Regions One and Nine.

“We also have another government of Guyana funded project which is about to be rolled and that one is targeting Regions One and Nine. This one is going to target specifically some commodities. Those commodities where you can add value, that is agro-processing.”

Dr. Homenauth explained that emphasis has been placed on agro-processing and as such, a list of commodities has been identified to pilot the project. These are cassava, peanuts and cashew which will be mainly cultivated in Region Nine while work will be done with ginger and turmeric commodities in Region One.

Region One is already on its way to having a facility commissioned which will see the processing of one ton of fresh turmeric rhizomes within three-days. Dr. Homenauth added that NAREI has budgeted for a solar-powered facility in Region One which will be able to facilitate the mechanised drying of spices.

“Those projects will go a far way for value addition and in terms of empowering those communities, the hinterland communities, so that is why we are focusing this year on hinterland development, something that will not (be focused) only for this year.”

For value-added production in Region Nine, Dr. Homenauth said that the pursuit is to extend the shelf life of the identified commodities, just as it was done with tomatoes in Region Eight. “We have to look at value addition because if you have for example planting cassava, you must have processing facilities in place to ensure that once you have these things processing the shelf life of the food is going to be preserved because that’s a staple.”

The hinterland diversification programme came on stream as the agriculture ministry saw it fit for the country, particularly farmers, to adapt to climate change. Moving farming inland has the potential of becoming a self-sufficient, agricultural stronghold, with the ability to address and ultimately solve the food insecurity of the Caribbean.