The Caribbean Agricultural Extension Providers Network (CAEPNET) has recognized the works of Guyana Rice Development Board’s (GRDB) Extension Officer, Rishal Ramsarran as the Extension Officer of Excellence within the Caribbean. The recognition was made by Dr. Norma Samuel at the recently held annual Caribbean Food Crops meeting. 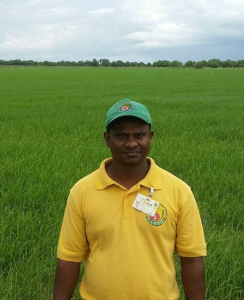 Rishal Ramsarran, who is well known in farming communities across Region 4, possesses a passion for agriculture, sighting his love for the field as a result of being born into a successful farming family. He is passionate about helping farmers and as a result, he has given exemplary service as an extension officer for thirteen years and works with five hundred and forty-seven farmers spanning eight thousand, nine hundred and fifty acres of rice fields.

He has successfully applied the Farmers’ Field School Methodology in offering his services to over five hundred farmers within his assigned area, resulting in yields increasing from twenty-eight bags to sixty-five bags of paddy per acre. The methodologies that were used to channel the information to the farmers are; the Farmers’ Field School (FFS), method demonstration, regular field visits, farmers’ field days, exchange visits, end of season reviews and other awareness programmes. These approaches have proven to be very effective in building relationships and promoting technologies among farmers.

Ramsarran stated that persuading farmers to adapt to new methods was not an easy task. He encountered challenges from the initial field schools that were hosted in his assigned area. The reaction of farmers after he explained the purpose of FFS was not welcomming’. Such comments did not deter him but rather, Ramsarran saw it as a challenge to prove his capabilities in the field. He realized that this was an opportunity to get farmers more interested in the FFS.

“The GRDB allotted a plot to conduct a demonstration where farmers of the FFS will attend training sessions to assess the crop and make comparisons with theirs. Through this method, I gained the respect of the farmers because I was able to interact with them on a weekly basis and at the same time allow them to exchange their views among themselves.” Ramsarran said.

He noted that his aim as an extension officer is to assist all rice farmers in Region 4 to achieve an average yield of sixty (60) bags per acre. This, he added, will make them more competitive with other rice producing countries. It augurs well for income generation for Guyana as a country while aiding in the fight to alleviate poverty, especially in rural rice farming communities.

This achievement by the farmers has made a significantly positive impact on both their incomes and livelihoods and has resulted in many farmers having more disposable income to improve and upgrade their farms while enjoying a better quality of life.

CAPENet will present the ‘Extension Officer of Excellence’ Award to Mr. Ramsarran at a later date. The Board of Directors, Management and staff extends congratulations Mr. Ramsarran on his achievement and wishes him success in all his future endeavors.