Extension Officers of the Guyana Rice Development Board (GRDB) in Region Two have been working with rice farmers to have better yields in the planting of paddy. The GRDB has shared with the Department of Public Information/Government Information Agency (DPI/GINA) an outline of activities carried out by extension officers within the region. 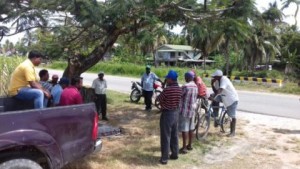 Extension Officers in Region Two, meeting with some rice farmers.

Activities were conducted in the Bush Lot to Windsor Castle, and the Hampshire Court to Liza districts which were affected by flood due to heavy rainfall. Activities in these areas are still ongoing where all farmers are invited to attend and/or be a part of these exercises.

They were six outreach meetings within these areas with an attendance of 55 farmers. At these meetings farmers raised matters pertaining to the Industry along with problems encountered during the paddy planting and harvesting process. For the last autumn crop and the recently concluded spring crop, a total of 690 field visits were conducted.

The Paddy bug demonstrations were  facilitated in an effort to eliminate the plant pest. During the spring crop, extension officers carried out daily paddy bug monitoring exercises, focusing on areas where a more accurate representation of the paddy bug level could be obtained.

Flood assessments were also facilitated with farmers who were severely affected and suffered losses due to flooding.

Extension officers designated two weeks to correcting the losses as result of flooding while aiding farmers to make better decisions to increase paddy production in the future. 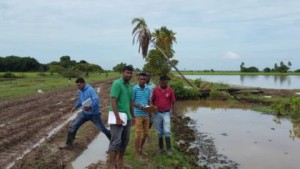 During this year’s spring crop which ran from March to June, extension officers carried out at least five demonstrations in these two districts on managing and/or eliminating the Schoonard grass. The population of this particular weed has decreased significantly over the years. The role of extension officers in this region has contributed to the decrease of this weed prevalence.

Schoonard Grass (Echinochloa glaberescens), also called ‘monkey tail’ by farmers on the Essequibo Coast was first reported as a weed problem in a farmer’s field at Schoonard on the West Bank of Demerara during the second crop of 1997. Since then, reports have come in from other rice growing regions of its presence as a noxious weed, forcing many farmers on the Essequibo Coast to abandon some heavily infested fields. It resembles the rice plant and is only distinguishable after the flower (inflorescence) has emerged.