In keeping with its mandate to improve Guyana’s small ruminant sector, the Guyana Livestock Development Authority (GLDA) with funding from the Caribbean Agricultural Research and Development Institute’s (CARDI), Agricultural Policy Programme (APP) procured three mature Katahdin rams. The animals were acquired at the cost of US $9000 and will aid the authority Genetic Improvement and Stock Breeding Programmes.

This particular breed was seen as suitable for the agency’s genetic and stock improvement programs as they possess relatively low mortality rates, require low maintenance and produce superior lamb crops. Their smooth hairy coat and other adaptive characteristics make them extremely tolerant to the climatic conditions of Guyana.

Chief Executive Officer of GLDA, Mr. Nigel Cumberbatch indicated that the authority is continuously in pursuit of ways to improve the Guyana’s livestock sector hence the purchase of the Rams.

“We are always thinking of ways to improve the sector. GLDA continues to work with regional and international partners to introduce new species of animals the genetic improvement program. CARDI has always shown great interest in the development of the sector and these animals fit well into the vision. The small ruminant sector continues to play a major role in income generation for farmers and the addition of such a breed will only add to the already positive results we are getting.” Mr. Cumberbatch said. 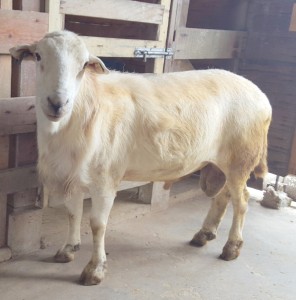 One of the imported animals

The Katahdin are natives of the United States but was originally breed from animal originating in the Caribbean and the British Islands. Ewes average about 55 to 73 kg at maturity while the rams range from 80 to 110 kg. The lambing type is usually twining but occasionally produces triplets or quadruplets with an average birth weight of 3.5 kg. Well-managed and selected flocks tend to produce a 200% lamb crop with a dress out percentage of approximately 50%.

Deputy Chief Executive Officer, Dr. Dwight Waldron in an invited comment stated that a program will be rolled out shortly which will see farmers across the country benefiting from the animals.

“Semen from these animals will be made available to farmers very soon. We have commenced training the animals – we have to artificially extract the semen. Training and extraction will commence in a week. Once this process is complete and the rainy season ends we will start making the semen available to farmers across the country.” Dr. Waldron said.

The animals arrived in April 2017 and are currently being housed at the authority. The Katahdins also possess a lean meaty carcass which will allow higher market weight and if managed carefully, require minimal parasitical treatment.

Farmers interested in the program are being asked to contact the Guyana Livestock Development Authority on Tel#220-6556/7.