The Ministry of Agriculture’s Hydrometeorological office today, met with stakeholders at its third National Climate Change Outlook Forum, ahead of the rainy season in May/ June/ July. 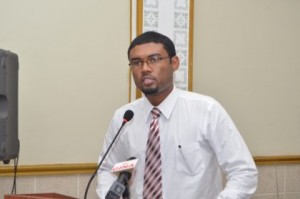 The forum held at the Pegasus Hotel, Kingston is expected to guide the Hydrometeor-logical service in the provision of climate information to meet the needs of stakeholders. Some of the stakeholders include the Guyana Livestock Development Authority (GLDA), the Guyana Rice Development Board (GRDB), National Agricultural Research and Extension Institute (NAREI), and the Civil Defence Commission (CDC).

The hope is that the Ministry, along with the various stakeholders would be able to devise a plan to equip farmers for the upcoming primary rainfall season. 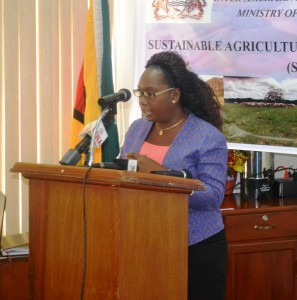 Acting Permanent Secretary (PS) to the Ministry of Agriculture, Joylyn Nestor-Burrowes said that forum is a step towards a regular systematic and coordinated process of climate risk management.

According to the acting PS, “the dialogue process would ultimately enable a shift to a risk management approach that makes use of probability forecast hence building resilience in climate sensitive sectors such as agriculture, health and disaster risk management.”

Nestor-Burrowes noted that one of the main aims of the forum is to develop more efficient ways of distributing information to farmers, and using a language that is easier for them to comprehend. 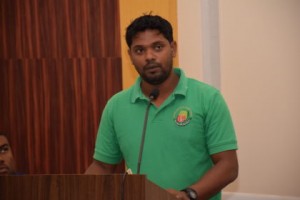 Dashrat Narine, a representative of the GRDB said that over the years, understanding data presented has posed a problem for thousands of farmers. According to Narine, the Hydromet office would usually distribute weather information via emails.

However, Narine noted that the Hydromet office needs to find more efficient ways of getting the information to farmers as many do not have access to the internet. “We need to have more flyers to give to these farmers rather than sending out emails and you also know that sometimes the internet connection is not that good,” Narine explained.

This suggestion was seconded by Aaron Ramroop representing NAREI, during his presentation. Ramroop stressed that it is necessary to revise the way the Hydromet office distributes information that even some of the field officers are not able to understand the data being disseminated. 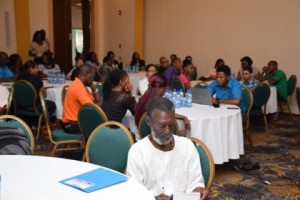 “Some of our extension officers doesn’t understand or even cannot comprehend how the data is being presented,” Ramroop explained, adding that, “Sometimes you find that the data is sophisticated for the farmers’ level.”

Stakeholders also raised concerns about the Hydromet office’s collaboration with the National Drainage and Irrigation Authority (NDIA). Such a collaboration, the stakeholders argued, would ease some of the flooding farmers endure.

Acting Chief Hydromet Officer, Dr. Garvin Cummings responded that the Hydromet office makes all weather information available to all the relevant departments. “If we are forecasting rainfall for Region Four, and we are forecasting anything in excess of one-and-a-half or two inches of rainfall, then the NDIA, the City Council, Ministry of Public Infrastructure all know that that presents a risk of flooding,” Dr. Cummings explained.

He noted that when the information is provided it is left up to the relevant authorities to make the necessary interventions. According to Dr. Cummings, the Hydromet office plays a supporting role to those agencies and cannot make decisions for them.