Bell peppers, the large green red and yellow ones that are imported, are now being grown locally and are being sold at a competitive price. The peppers may soon be exported.

The peppers are being cultivated by Dhaniram Ramchand, a local farmer and proprietor of Green to Life farm located at Bath Settlement, West Coast Berbice. 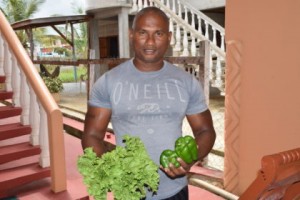 Dhaniram Ramchand, Local agriculture producer (farmer) with a sample of the crops which he cultivates (bell peppers included)

One of the plots at ‘Green to Life’ can hold as many as 600 bell pepper plants which yield more than 3000 pounds of pepper, per crop.

The farm was recently certified by the National Plant Protection Organisation (NPPO), a department within the National Agricultural Research and Extension Institute (NAREI). This means that produce coming from this farm are fit for export and can be accepted into another country as a quality, consumable good. Certification guarantees that the farmer would have produced crops under conditions that satisfy international market standards

Ramchand started farming ten years ago and has progressed with continuous support from the Ministry of Agriculture and the National Agricultural Research and Extension Institute (NAREI). “I learnt some farm practices and the way forward with green house production,” he told the Government Information agency (GINA) when they visited his farm recently.

Ramchand’s produce is cultivated under Ultra Violet (UV) plastic which protects vegetables and cash crops from sun and other weather damage. He said when bad weather affects the crops, the cultivation process is interrupted. This results in supply being unavailable and him being unable to meet market demand.

“Whenever we have excessive rainfall like about two day rainfall everything close down in this country nobody produces because they have a lot of damages once we go into greenhouse production and shade house production then we can be able to care the crop more. It could even culture them more and you can get better yield,” the farmer pointed out.

Ramchand plans to build a few more shade houses to ensure he has a ready supply of produce.

The farmer said he spends a lot of time taking care of his crops and it is worth the effort. He is proud that his farm is certified as this will help him get his produce into the larger supermarkets locally and possibly the export market.

“I am talking to Massy (Massy Supermarket), that is a market in Georgetown to start supply them with the bell peppers and other things that customers will go after, apart from that we (selling) celery and we will talk with them (to see) if they can buy the shallot and the celery seeing that I am the producer for the bell peppers too,” Ramchand told GINA.

Ramchand also manages an extensive plant nursery in which he cultivates various types of seedlings for sale to farmers and a chemical shop.

“I actually buy my seeds from (Caribbean Agricultural Research and Development Institute) CARDI that’s in NAREI and I only plant ‘seminis’ seeds that is highly bred seeds that will increase yield and give better production and pest resistance,” Ramchand revealed.

In addition to bell peppers, Ramchand cultivates shallot, celery, lettuce and tomatoes on a large scale wholesaling these commodities to vendors in Region Five and in Georgetown.

Peppers, also called sweet peppers are eaten as vegetables either raw or cooked and are among the most expensive peppers on local market. Based on the demand in the local market the bell pepper is one of those commodities that contribute to Guyana’s and Caricom’s growing food import bill.

CARICOM countries import more than US$4B annually in food. This has led to calls for diversified agricultural practices and increased outputs and for each CARICOM member state to reduce the food import bill.

Requirements include the inspection and audit of agricultural practices to ensure the production of safe consumable produce while ensuring traceability of the product. Certification means that green and other fresh produce exported has been subjected to all recommended farming inspections and monitoring exercises by a Quarantine Officer of the NPPO.

The institute has been promoting appropriate and relevant technologies to crop farmers to increase production and productivity of non-traditional crops. This is specifically to enhance food security, increase exports and value addition. 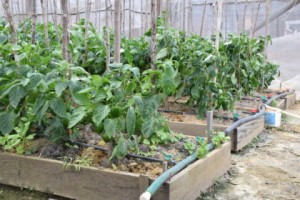 Green bell peppers before they are harvested at ‘Green to Life’ farms, Region Five 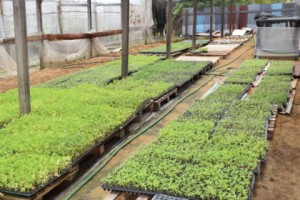 Celery in its seedling stage at the ‘Green to Life’ farms, Region Five