The workers who received pay are those who were noted to be redundant and employed by the Wales sugar estate. 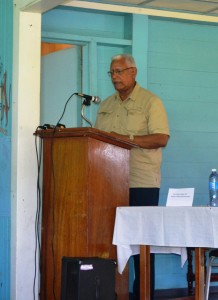 A ministerial team consisting of Minister of Agriculture Noel Holder, Minister of State Joseph Harmon, Minister of Public Telecommunications Catherine Hughes and Minister of Public Security Khemraj Ramjattan visited the Wales community to address a number of issues. The  future of the sugar workers was at the top of their agenda.
Minister Holder explained that 1118 workers attached to the Wales estate stand to be affected by the transition process. However 675 persons are to remain employed with the estate, 374 of whom are required to complement cane harvesting at Uitvlugt estate.
“Sadly, many of these persons have been misled to take severance rather than take up employment at Uitvlugt estate.  Not going to Uitvlugt would put Uitvlugt’s survival at serious risk. Fifty four ( 54) have been transferred to other estates and unfortunately 389 persons have been made redundant,” Minister Holder said.

Residents and sugar workers of the Wales estate, gathered to meet with Ministers of the Government

The final redundancy cheques were to have been issued this afternoon, Minister Holder said.

Prime Minister Moses Nagamootoo had announced in December that almost 100 workers at the Guyana Sugar Corporation’s (Guysuco) Wales Estate received $80.1M in severance pay. The severance pay issued to date is said to be more than $300M.
At the meeting today, other sugar workers raised issues about the distance  to travel to the Uitvlugt estate on the West Coast Demerara to work. However, Minister Ramjattan reiterated that transportation has been made available for all staff reassigned to work at Uitvlugt.

Minister Ramjattan explained that, “GuySuCo’s lawyers are taking a legal opinion out, very senior lawyers who have indicated that it might not be applicable here. I understand that we are going to court and we will respect the court’s decision, this matter in relation to whether severance should be paid in the context of the distance but also the fact that GuySuCo is going to pay your transportation and arrange all of that and so on.”

Minister Holder told residents that “an important part of our strategy to make our people more resilient and independent is to lease land to employees to transition them into becoming farmers, to be more in control of your destiny, to give you a greater stake in the wealth to be generated in the community.” 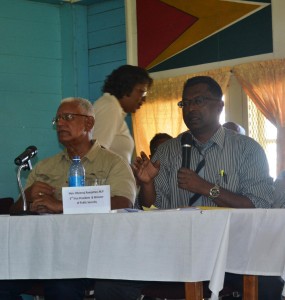 Minister of Public Security, Hon. Khemraj Ramjattan while answering questions during the meeting

The Ministers opened the floor to residents of the West Bank Demerara, giving them the opportunity to ask questions with regards to the development of their communities.
Residents lobbied for better facilities for youths and expanded agricultural activities in the area. They suggested that lands reclaimed by the government from GuySuCo could be leased for these and other purposes.
Meanwhile others raised questions about support for and assistance in identifying and maintaining markets if they were to venture into subsistence farming.
Share: