As Guyana continues to implement measures to improve safety in the aviation sector, the Bird Strike Committee today held a meeting to discuss ways in which they can further advise poultry and other livestock farmers on proper disposal techniques of dead animal and animal waste. The meeting was held at the Cheddi Jagan International Airport where the committee several issues including the need and importance of imposing sanctions against farmers who do not comply with the rules and regulations set out by the relevant authorities. The campaign will targets farmers operating within the flight zone area of the Cheddi Jagan International Airport.

The goal of the committee is to ultimately stop the instances of crows, who feed on the animal waste, flying into the engines of aircrafts which could result in accidents. It was recognized that some farmers would indiscriminately dispose of dead animals and as a consequence the crows would congregate in the area. This significantly increases the potential for them to come into contact with an aircraft which could result in the aircraft crashing and lives being lost.

A section of the members during the meeting

Deputy Chief Executive Officer of the Cheddi Jagan International Airport, Mr. Andy Kelman indicated that the airport authority is responsible for the committee and the work carried out. “During previous meetings we discussed the fact that the committee’s work has been greatly appreciated but there is still a need to have a buy-in at the very senior level of the various entities being represented on the committee.” Mr. Kelman said. 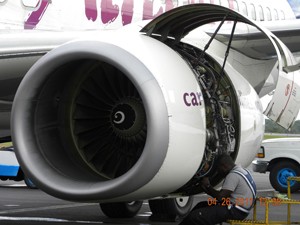 A section of the plane that was involved in the incident

The committee was formed after a “near miss” incident in April, 2011 which saw a Caribbean Airlines aircraft being forced to make an emergency landing, following a bird strike. The incident was seen as a result of a vulture, believed to be attracted to animal waste that was illegally dumped in the area from poultry farms, was sucked into an engine of the Caribbean Airline flight shortly after it took off. After investigations were carried out, illegal dumping grounds off the Soesdyke/Linden highway, on which feathers and other waste from the chicken and pig farms in the area were found and later burned. 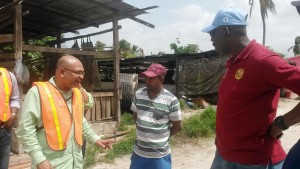 Mr. Andy Kelman and Mr. Michael Welch while speaking to one of the farmers during the field visit

Head of the Livestock Development Unit at the Guyana Livestock Development Authority (GLDA), Mr. Michael Welch, indicated that the committee is continuously working with farmers on the ground to change the ways in which they dispose of dead animals. “The aim of the committee is to eliminate the instances of bird strike by working with farmers to instil in them the dangers of improper and irresponsible disposal of dead animals and animal waste. When farmers act responsibly in this regard, it would reduce and ultimately eliminate the food source of these birds which would force them out of the area over a period of time.” Mr. Welch said.

The committee also conducted field visits to several farmers along the Timehri/ Soesdyke area to carry out inspections on farms and to further sensitize farmers on responsible disposal of dead animals and animal waste. The committee is also looking to have the relevant agencies implement regulations, whereby large farm would be required to have specific measures of disposal implemented. 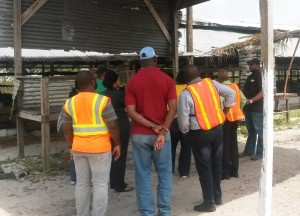 Members of the Bird Strike Committee during the visit

GLDA committed to having more interaction with farmers through their extension officers visiting the farms and offering advice on best practices to significantly decrease animal mortality rate. Additionally, the Environmental Protection Agency (EPA) committed to providing assistance to farmers who wish to lodge complaints about persons in the area who are not complying with the set rules and regulations.

The committee comprises of representatives from the Guyana Livestock Development Authority arm of the Ministry of Agriculture, The Cheddi Jagan International Airport, The Environmental Protection Agency (EPA), The Guyana Defence Force (GDF), the Ministry of Public Infrastructure, Soesdyke Neighborhood Democratic Council and Bounty Farm. For further information on work of the committee, persons are asked to contact the Litter Prevention Unit of the EPA on 225-0506 ext. 275 or the Guyana Livestock Development Authority on 220-2864.