‘Quinoa’ – Next Major crop in Guyana

Quinoa (pronounced keen-wah) is an organic seed that is natively grown in Bolivia, Peru, Argentina and Southern Chile in South America. The grain which has major health benefits promises to be the next major crop grown in Guyana. 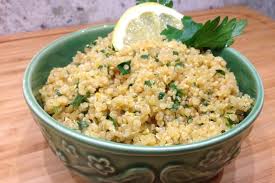 Quinoa prepared as a substitute for rice

Based on research carried out by scientists at the National Agriculture Research and Extension Institute (NAREI), there is consideration to venture into farming the grain in Guyana.

“We are looking at a crop that was mentioned, I think it was mentioned by His Excellency, I believe the president would have mentioned it, Quinoa. Quinoa is one of those health foods that is gaining prominence worldwide. We have been working with the (Food and Agriculture Organisation) FAO in this regard and very shortly we will get some seed material from Peru that we can utilise here and it will be done in hinterland areas.” Dr. Homenauth explained.

The Dr. Homenauth added that this crop was never planted in Guyana and several variety samples will be acquired to determine yields and to have indications for a way forward with the food type.

Quinoa is an herbaceous, tiny, bead-shaped, with a slightly bitter flavoured coating, nutty flavor with a firm texture. It has more than 200 varieties which can be mainly classified by the basis of areas in which it is grown.Unlike wheat or rice, quinoa is a complete protein – containing all eight of the essential amino acids. Although there are hundreds of cultivated varieties of quinoa, the most common versions available are white, red, and black quinoa.

It has been recognized by the United Nations as a ‘super crop’ for its significant health benefits. It is also gluten-free and easy to digest. Quinoa provides all nine essential amino acids, making it a complete protein. Quinoa contains twice as much fiber than any other grain and also has iron, magnesium, Riboflavin (B2), and a high content of manganese.

Cooked and raw (side by side) quinoa

While quinoa is usually considered to be a whole grain (similar to regular white rice, brown rice and other grains such as wheat and barley), it is actually a seed, but can be prepared like whole grains such as rice or barley. When cooked, its grains quadruple in size and become almost translucent.

This legume that is both of starch and legume nutrients may not be a household name just yet but after its cultivation and promotion it can be used as a substitute for rice and other whole grains.