NDIA deployed to Linden for the first time

Twenty seven communities in Region Ten will benefit from works to be done by the National Drainage and Irrigation Authority (NDIA). This is the first time that NDIA will be working in the area.

Chief Executive Officer (CEO) of the NDIA, Frederick Flatts, said  that a large excavator and two smaller ones have been deployed to the Region to assist with drainage and irrigation works.

“We are seeking to do enough works in Linden to make it possible for people to plant and so people can be more self-sufficient,” Flatts said.

Flatts, however noted, that residential areas including  Block 22 and Coomacka  have drainage problems that require long term solutions. He said the NDIA is prepared to assist in those long terms solutions. 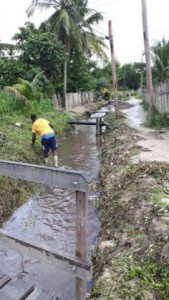 One of the cleared drains at Victory Valley, Region Ten

Work by the NDIA in collaboration with Neighbourhood Democratic Councils (NCDs,) started in the second half of 2015. Residential and farming communities had suffered from silted waterways which led to persistent flooding.

Flatts said this is the first time that the NDIA would have executed drainage and irrigation works in the region. He further noted that significant improvements in the drainage systems have been recorded. However, there is still more to be done, taking into consideration the important roles that other key farming and agriculture stakeholders play in the process.

“In terms of persons being able to plant more in Linden, it takes more than just drainage and irrigation. There are other areas that have to be addressed but we are seeking to do our part from the NDIA in terms of drainage and irrigation. If they need to do more works, we have the ability to hire equipment and to get those works done,” the CEO said.