Minister within the Ministry of Public Health, Dr. Karen Cummings and a team of health officials traveled to Buxton to hand over medical and cleaning supplies to residents who were affected by recent floods.

This was to ensure that persons in the flood affected areas do not contract any serious water borne disease.

Dr. Cummings told the Government Information Agency (GINA) that the Ministry of Public Health provided  medical supplies, bleach and Jeyes Fluid, and educational material that provide guidance on how prevent an outbreak of gastroenteritis. “We want the people of Buxton to know that we don’t want them to have any water related disease be it water borne, water based, water washed or water-insect related,” she said.

Minister Cummings also pointed out the timeliness of the aid and added that the health of citizens is important.

Director of Regional Health Services Dr. Kay Shako said that there have been no reports of diarrhea or vomiting. 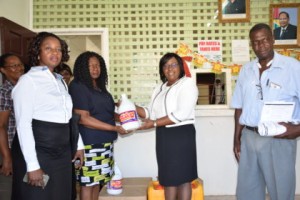 “There were no cases of reported critical illness but if that should happen there is an adequate supply of drugs at present except for ORS (Oral Rehydration Salts) and gravol tablets. However, I would have spoken to the materials management unit and they said they would have had sufficient drugs to take care of any outbreak if such arises,” Dr. Shako explained.

Buxton has been known for medium to large scale agriculture activities such as cattle rearing and cash crops such as celery, shallot and peppers. This is mainly how residents earn an income for a daily livelihood.

Chairman of Buxton/Foulis Neighbourhood Democratic Council (NCD), Deon Abrams, also highlighted that the contribution is welcomed and indeed showed some level of concern by the government for the health and wellbeing of residents.

Abrams said that there are interventions made by the National Drainage and Irrigation Authority (NDIA) to alleviate flooding but more needs to be done.

Residents suggested that the refurbishment of sluices and culverts would assist in the drainage while others need to be monitored to ensure they are not vandalized or operation breaches.

The flooding in the Buxton village resulted from a breach at the Middle Walk Canal channel door which allowed water into the drainage system, affecting residents with flood waters. The NDIA chief noted that works are ongoing to provide a long term solution to flooding that have been experienced at Buxton.