Ambassador (Designate) of the People’s Republic of China, His Excellency, Cui Jianchun today paid a courtesy call on Minister of Agriculture, Hon. Noel Holder at his Regent and ShivChanderpaul Drive  Office.

Minister Holder in welcoming the Ambassador to Guyana expressed appreciation for the strengthened relations that exist between not only China and Guyana, but also the entire Caribbean; in ensuring economic development through trade.

The discussions between the delegation and the Ministry of Agriculture is expected to help the two countries tap into unexplored mutual areas of interest, not explored in the past. Among the areas discussed where Guyana can receive assistance are Value Added, the advancement of its Cottage Industry, Technological advancement and training. 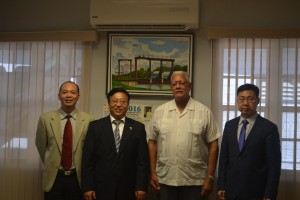 “Guyana has benefited from the assistance of the Chinese Government in the past and we welcome the further advancement of relations, which the two country successfully shared, especially in the areas of infrastructure, electricity and technology…however, we must catapult agricultural advancement also,” the Minister said.

“The Government’s thrust for development in the agricultural sector over the next five years is hinged on the drive to diversify and expand production in not only traditional but non-traditional activities…our focus is centered on agricultural diversification, but on moving agriculture beyond the coast to the hinterland, due to the adverse effect of climate change,” the Minister explained.

In November last, outgoing Chinese Ambassador, H.E Zhang Limin pledged China’s continued support to the development of the Agriculture sector during dialogue with the Agriculture Minister. Today’s exercise is building on promises made by China to further advance Guyana’s agricultural development.

Ambassador Cui Jianchun expressed satisfaction of Guyana/ China relations, noting that over the next few months through discussions with the Ministry of Agriculture, new areas for future collaboration will be heightened.

“Guyana and China can boast of having sound relations and it is my job to ensure that we not only maintain those relations, but how we (China) can assist Guyana further, especially in the area of Agricultural development,” the Ambassador said.

The Ambassador was accompanied by his Political and Commercial Councilors respectively.

According to Mr. Shen Hui Yong, Commercial Councilor , a number of Chinese companies have already investing in Guyana and have submitted proposals for further investment.

This year,  Guyana’s fisheries industry should also see technical assistance being given  by China.

Meanwhile, Political Councilor, Mr. Yang Chengi  extended an invitation to the Agriculture Minister to participate in China’s International Horticulture event which will run from April to October 2019 in Beijing, China.

“The event is used to showcase China’s biodiversity and as such, I think it is an important event for Guyana to display biodiversity- both tapped and untapped potential,” he said. 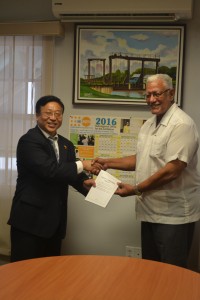 The Ambassador (Designate) who hold a Masters Degree, also served as Deputy Director General of the Capital Operation Department of China National Nuclear Corporation (NCCN), Minister Counselor of the Chinese Embassy in the Republic of France, Ambassador Extraordinary and Plenipotentiary of the People’s Republic of China to the State of Kuwait and Deputy Director General of the Department of Consular Affairs of the Ministry of Foreign Affairs of the People’s Republic of China.

Over the years, Guyana and China shared fruitful bilateral relations which resulted in the implementation of successful projects in the health, education, infrastructure and agricultural sectors. Guyana and China officially  established diplomatic ties on June 27, 1971.

Since then, their relations have been concretised by several agreements and cooperation in various sectors.