Agriculture Minister Hon. Noel Holder today, visited pump stations along the East Coast of Demerara to ensure sluice attendants were vigilant and that the pumps are being operated to full capacity. The aim of the visit is to ensure that accumulated water as a result of excess rainfall over the last 12 hrs recedes.

Visits were made to pump stations and sluices located at Kitty, Liliendaal, Montrose, Lusignan and Buxton. During the visit it was evident that all pumps are operable and water is receding as expected. 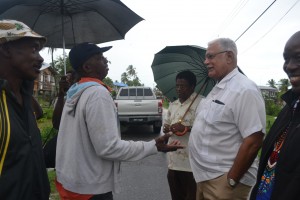 “It has been an ongoing effort by our Government but, as we make progress in this regard, there will be difficulties and there will be new challenges… throughout our country, we will continue to deal with the erratic weather that is taking place. But we also have to look to working with farmers; look at how we can make our farming activities, climate resilient,” he said.

In addition, visits were also made to affected communities along the coast where the Minister and Team interacted with residents, while updating them on Governments plans to improve drainage and irrigation (D&I) along the coast.

” Government had embarked on the rehabilitation of the drainage infrastructure as one of its priorities after taking office in May 2015. It has spent huge sums on works in the city and along the coastal regions to prevent and alleviate flooding,” the Minister said. 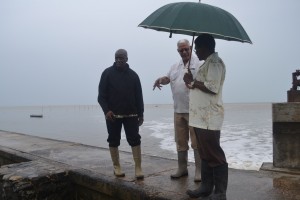 Earlier today, the National Drainage and Irrigation Authority (NDIA) had announced it preparedness to effectively respond to any eventuality which may arise as a result of the rainy season. As a result, Pumps and Excavators had been deployed countrywide.

93 and 94 percent of pumps and excavators respectively owned and operated by the NDIA are operable and have been deployed at critical locations in all coastal regions,  to assist in drainage needs.

The Hydromet department has since advised that rainfall is expected to continue for the remainder of Friday and Saturday and as much as 45mm is expected which is above the established drainage capacity within the city. 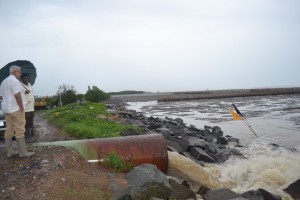 To respond and deal effectively with the challenges, the Ministry of Agriculture will be looking at a three-pronged approach. This will see emphasis being placed on assistance to get farmers back to the land, construction and rehabilitation of pump stations at strategic locations and identification of areas where new farming can commence.