Guyana is, for a third year, hosting the 29th Biennial Caribbean Veterinary Medical Association Conference, which officially begins last evening and will see over 200 veterinarians from countries across the Caribbean and the Americas in participation. The aim of the conference is to integrate and cause participants to have a better appreciation for the One Health Concept.

Over the next three days, participants will engage in discussions that will ultimately foster better collaborative efforts for improved human and animal health in the region. This year, the conference is being observed under the theme “New Horizons in Veterinary Medicine: Embracing One Health, One Medicine, for a safer world”. 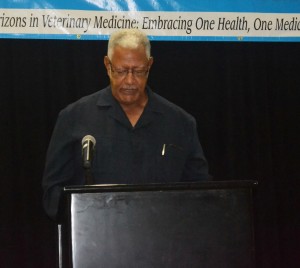 While delivering the keynote address at the opening ceremony last evening at the Marriot Hotel, Agriculture Minister, Noel Holder, spoke of the unique opportunity the conference offers for knowledge sharing, highlighting areas of interest such as animal welfare, one health and the use of technology in veterinary medicine.

“We are faced with a projected world population of nearly 9-10 billion people by 2050. This will result in an unprecedented increase in the demand for animal protein, including meat, eggs, milk, and other animal products. The high economic growth rates in the developing world are contributing to the increase in meat consumption. The International Food Policy Research Institute (IFPRI) asserts that this growth is a central force of change, especially changes in the demand for certain types of food, which are often considered nutritionally superior and a symbol of wealth and social status,” the Minister said.

These changes, according to the subject Minister, have led to a greater demand for more meat, eggs, and dairy products that is being met by industrial animal operations. 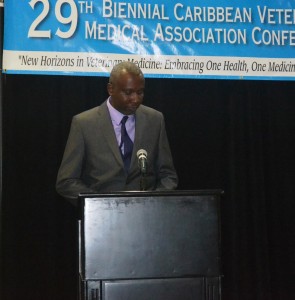 President of the Guyana Veterinary Association, Dr. Nicholas Waldron, said that the conference will not only focus on veterinary science but also on technological advancements as a means of keeping up with changes in the world such as climate change.

“Although production and marketing help to stabilize food supply by acting as a buffer to economic shocks and natural disasters, food supply can still be destabilized by animal diseases and bioterrorism.  World Bank statistics indicate that Zoonotic diseases account for 70 percent of emerging infectious diseases (World Bank 2012). The cost of the six major outbreaks that have occurred between 1997 and 2009 was $US80 billion. If these outbreaks had been prevented, the accrued benefits would have averaged $6.7 billion per year. One of the greatest challenges facing animal health has been the lack of resources available to combat emerging and re-emerging infectious diseases. In the majority of countries most public funding is given to the concerns of human health with limited focus on the animal health side.” Minister Holder said. 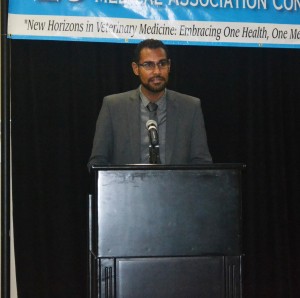 “This conference will be broad in scope but will maintain a Caribbean focus. One Health is about collaborations and I urge you to play an active role in your local associations. If we intend to create change we have to push for it.” Dr. Crooks said. 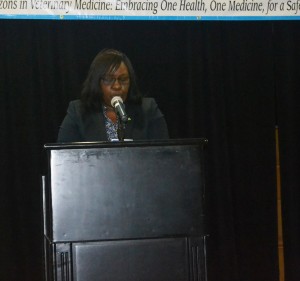 Minister within the Ministry of Public Health, Dr. Karen Cummings

Also speaking at the opening ceremony, Minister within the Ministry of Public Health, Dr. Karen Cummings. Dr. Cummings indicated that Guyana is, and has always been an active participant in the One Health Initiative which seeks to promote, improve, and defend the health and well-being of all species by enhancing cooperation and collaboration between physicians, veterinarians, other scientific health and environmental professionals and by promoting strengths in leadership and management to achieve these goals.

“Guyana will provide relevant support through the relevant ministries. I strongly believe that synergies achieved through the One Health Initiative will deliver new health benefits for the future in addition to yielding progress and advancements for veterinary medicine and practices. We must not overwrite the importance of veterinarians as they are the ones who are responsible for reporting potential diseases and threats to human and animal health.” Dr. Cummings said.

Minister Holder also indicated that much focus has been placed on the enhancement of the Surveillance and Epidemiology Departments of the Guyana Livestock Development Authority (GLDA) through collaboration with some key international partners such as Pan American Health Organization/World Health Organization PAHO/WHO), Pan American Foot and Mouth Disease Center (Panaftosa), Inter-American Institute for Cooperation on Agriculture (IICA) and United Nations- Food and Agriculture Organization (FAO).

With the advent of globalization the need to adequately monitor all livestock facilities cannot be overstated, thus GLDA is moving towards fully implementing a Geographic Information System (GIS) through which it could enable an effective early warning system with enhanced traceability capabilities.

“Coupled with a laboratory capable of identifying the important diseases, these departments would be in a position to ensure the safety and wholesomeness of our livestock products as well as the improved welfare of the livestock farming community. Quarantine, inspection and certification are other vital areas that have been improved and our new quarantine stations and outposts which are located in the border regions and our ports of entry are being upgraded to safeguard against threats of any zoonotic disease and diseases of economic importance entering our shores.” the Minister said.

To further achieve these goals, the Ministry has placed before the Parliament of Guyana, two bills that will impact hugely on the ability of the country to provide assurances to consumers. The Food Safety Bill which will see an integrated system being put in place for the revamping of the entire food safety system in Guyana, and the Animal Welfare Bill which will further enhance the confidence of the consuming public.

Through the Food Safety Bill, the Government of Guyana will establish a Food Safety Agency which will seek to regulate the production, placing on the market and sale of food from the farm to the consumer, to ensure safe, nutritious and healthy meals. This robust regulatory mechanism will encompass all areas of production of ready to eat consumables or raw materials for the production of food; be it fruits, vegetables, milk, meat, fish or potable water. The operations of the Food Safety Agency will be based on the One Health Concept.

The Caribbean Veterinary Medical Association Conference will now be held annually. The 2017 conference will be hosted in Jamaica.